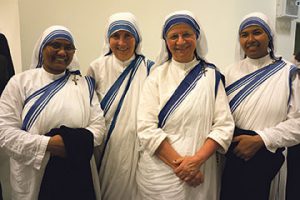 Missionaries of Charity Sisters (l-r) Srs Therese, Hannah, Stephanius and Amalia, invite you to celebrate with them a thanksgiving Mass for the Canonisation of Blessed Teresa of Calcutta, at Sacred Heart Cathedral, Wellington, 9am, Saturday 10 September. Photo: Annette Scullion

From Missionaries of the Charity Sisters, Porirua

The little community of four sisters of the Missionaries in Porirua are overjoyed at the news that their Foundress and Mother, Teresa of Calcutta, will be canonised in Rome on September 4 this year, by His Holiness, Pope Francis.

It was the Holy Father’s desire to have Mother Teresa canonised during this Extraordinary Jubilee of Mercy so that she might be proposed to the world as a ‘Saint of Mercy’. Therefore, the theme for her canonisation has been chosen as ‘Carrier of God’s Tender and Merciful Love’.

Mother Teresa was truly an icon of the Father’s Mercy, revealing the tenderness of God’s merciful love for those most in need, through her humble works of mercy done to the poorest of the poor.

Many people will remember when Mother Teresa visited Wellington at the end of February 1973 and addressed a packed, lunchtime, public reception at the Wellington Town Hall. She told the crowd then, ‘Many people may not be hungry for bread but they are hungry for love’. May Mother Teresa’s example and message encourage us also to put ‘love into living action’ to those around us – as she did by doing ‘ordinary things with extraordinary love’ – and beginning in our own families.

The Sisters would like to invite you to celebrate with them in offering praise and thanksgiving to God for the Canonisation of Blessed Teresa of Calcutta at a Mass on Saturday 10 September, at 9am, at Wellington’s Sacred Heart Cathedral. The main celebrant will be Cardinal John Dew. All are welcome. Veneration of the relic of Blessed Teresa will follow Mass.

We may not be called to do exactly what Mother Teresa did, but we can do what God entrusts uniquely to each one of us. Mother Teresa understood this well as she often said, ‘What I can do, you cannot; what you can do, I cannot. But together we can do something beautiful for God.’