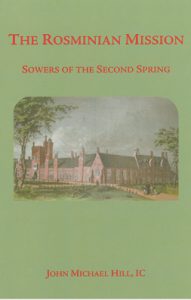 Fr Michael Hill IC, a Dunedin-based member of the Institute of Charity (also known as the Rosminians), presents The Rosminian Mission Sowers of the Second Spring.

The origin of the book is pitched in the preface as, simply, another story Fr Michael had to tell following the earlier completion of a biography on the founder of his Religious Institute, Blessed Antionio Rosmini. In the same breath, he then compares this new task, rather more grandly, to St Luke’s after writing his Gospel. St Luke’s work was unfinished without the Book of Acts. Similarly, having examined the founder of something great Fr Michael then considers what seeds were sown and what has been reaped.

Rosmini sowed many seeds. The seeds sown through Rosmini’s charges and subsequent followers in Britain and Ireland in the 1800s were indeed remarkable. More remarkable when we consider the cultural, religious, and societal challenges of the day, especially in the first half of the century.

Rosmini himself was remarkable in the way he challenged the status quo. Chapter 14 of the book gives us a specific glimpse of some of his trials, especially within the realm of the wider Church political. However, the main work of the book is to chart the course of a great mission to a Church under duress in first part of the 1800s in Britain and Ireland and the wider impact that an awakening Church had on society where ‘the intervention of God in human processes was challenged and atheism steadily advanced’.

I was struck by the fact that the Catholic Hierarchy (dioceses and bishops) in Britain was only re-established in 1850 following the reformation 200 years earlier. Although known, it reminds us is the Catholic Hierarchy was being established in New Zealand in the same period. Because of this coincidental historical confluence, I concur with Bishop Charles’ foreword to the book and say this book is indeed ‘not locked in history’. I believe the experiences that faced Rosmini’s first band of missionaries from Italy to Britain and those who followed are indirectly and sometimes directly applicable to the challenges facing Catholic faith communities here in Aotearoa today.

In particular, I recommend this book for those of us in the Diocese of Palmerston North as it gives insight on our recently resident religious community – the Rosminian community of Frs Robin and Manoj and Postulant Khuong, based at St Mary’s in Palmerston North. The book may even provide an insight into our Bishop Charles, himself an ascribed Rosminian, meaning someone who lives the spirit of Rosmini but doesn’t take the vows of the Institute.

Overall, I recommend this book to those who really want to grapple with the way the Church engages with society. Though from another era, it is a contemporary read! You will read some inspiring examples of some great seed sowing and harvest reaping in challenging soils.