Am I my brother’s keeper? Cain’s question may well inform those in the government seeking to revise the welfare system. Such a revision needs careful analysis in the light of the principles of Catholic social teaching for a fair and just society. 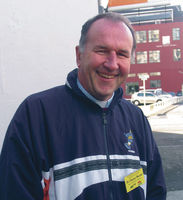 As God may have said to Cain during their discussion about Abel, whom Cain had murdered, the rhetoric of getting people back to work, freeing people from welfare-dependency and making scope for greater economic initiative must be measured against the realities of the job market and the society in which we live (though this part of the conversation is not recorded in Genesis 4).

I have lived in countries with little or no welfare provision and have seen the generosity of families and neighbours in providing for those in need. I have also seen the inadequacies and tragedies that a ‘left-to-charity’ approach brings.
It is the state that has the funds, coordinating scope and information-gathering abilities to enable systematic, fair and adequate care of its citizens.

A concern for how the poor are included has been part of Christianity from its earliest days. An example of this is Australasia’s first saint, Mary MacKillop. She spent her life responding in practical ways with her Josephite sisters to the needs of the poorest in 19th century New Zealand and Australian society.

Different cultures, faiths and societies have answered Cain’s quintessential question differently at various times. Jesus’ answer came in his loving example, in his teaching about who is our neighbour (The Good Samaritan), and about a love extending even to one’s enemies. It was a radical teaching which we who call ourselves his disciples have not always followed.

However, many religious congregations have taken up the challenge through their works in health, hospitality, education, spiritual care and social work. Caritas, parish justice and peace groups and organisations such as the Hibernians and St Vincent de Paul Society are other examples.

These efforts have achieved some remarkable results, but they cannot reach all those in need. Their relatively localised work meant they often operated as ‘the ambulance at the bottom of the cliff’.

Growth of the welfare state
Modern nation-states that have developed in the past 200 years (eg, NZ, Australia, Fiji, Samoa) have taken over some responsibilities from non-state groups such as Religious Orders.

For NZ it was partly the ideology of an egalitarian society that led to the beginnings of the welfare state under the Liberal government of the 1890s. Of course this egalitarianism was primarily for the white, settler population because, by then, Māori had been systematically dispossessed of lands, forests and fisheries.

The welfare state was also based on a certain gendered division of labour (male as head-of-the-house and breadwinner). This ethnic and gender bias continued into the 1930s when the first Labour government expanded the welfare state in response to the Great Depression.

Gradually this increased support for the unemployed and low-income families was built into the public health system with subsidised doctor visits and dental services, intervention in markets (eg, meat and wool boards to stabilise prices), cheap housing loans, etc.

Later, the domestic purposes benefit and accident compensation addressed the gender issue and the need to get people back to work after workplace accidents.

The NZ welfare state was built on a post-Depression and post-World War II, cross-party understanding that governments should act on behalf of their citizens. There was also a fear in the Western world that if democratic governments did not act for the unemployed and sick, they would lose their legitimacy.

This could lead to left-wing revolution (Russia, China) or fascism (Nazi Germany). The conclusion was that it was better to pay an unemployment benefit than to have rioting in the streets.

The NZ welfare state was also built on an expanding economy with meat and wool in demand and relatively cheap imports, especially of oil. This ended in the early 1970s when Britain entered the European Common Market and oil prices skyrocketed. NZ governments borrowed heavily to keep programmes going but then struggled in the early ’80s when interest on those loans mounted.

The government responded with the liberal restructuring of the economy and welfare systems under Roger Douglas and Ruth Richardson (1984-1991). They floated the exchange rate, privatised key state operations and cut benefits.

There was a pause when the Clark Labour governments bought back such key operations as Air NZ and NZ Rail and established Working for Families though in the different economic context of the late 1990s.

In terms of wealth, the cuts of 1984 and later sparked a growing disparity in NZ society that slowed only in the early 2000s. Fresh government proposals to revise the welfare system, meaning benefit cuts as an incentive to get people back into work, need to be examined in the context of the reality of the job market and the society in which we live.

The role of state
A purely statist approach to welfare and economics is not the answer but a modern state should not withdraw from the welfare field (which includes how markets are organised and managed).

Some of this debate is about where to draw the lines between the functions of state, civil society and family. Such considerations as the role of the state, a country’s economic base, social system, taxation methods and levels and individual and family rights and responsibilities come into play.

For Catholics the church’s social teaching provides some principles of analysis (preference for the poor and vulnerable, solidarity, subsidiarity, etc). In England the new Prime Minister has spoken often of the Big Society (in contrast to Big Government).

There is truth in the recognition of the role of civil society and intermediate institutions (and the role of private philanthropy) but we need to be careful. The rhetoric of care by neighbour in times of severe budget cutbacks in Britain can seem to be a mask of cost-cutting that will affect the poorest most.

In the light of bail-outs of the rich and companies ‘too big to fail’ that continue to make large profits, Catholic social teaching would ask who really benefits?