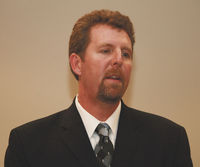 The meeting took place two weeks before the third reading of the Sentencing and Parole Reform Bill, which was passed by Parliament on May 25, introducing New Zealand’s version of ‘three-strikes’ legislation into law.
Showing pictures of tripled-bunked prisoners packed into every available space in prison gymnasiums, chapels, cafeterias and even storage rooms, he said: ‘What you can’t get a sense from the photos is the stench, the constant and unbelievable noise, the rapes and fights, the unconscionable things that we see and endure’.
California had around 55,000 prisoners and 600 prison chaplains when the ‘three-strikes’ law was passed in 1994. Now just 59 chaplains attempt to meet the needs of 177,000 prisoners. Chaplains, along with medical care, education and counselling, have become casualties of budget cuts resulting from the increase in prison numbers.
Overall prison numbers in the United States – ‘the home of the free’ says Mr Givens – have increased from 2.3 million in 2003 to 2.7 million this year, as other states have copied the Californian example.  ‘We have the highest incarceration in the world.  There are more people locked up in the USA than in the Soviet Union at the height of the Gulag system.’
Mr Givens visited New Zealand as a guest of the Howard League for Penal Reform, who opposed New Zealand’s adoption of the three strikes bill. This has introduced mandatory full term sentencing without parole for offenders facing their third conviction for scheduled crimes.
Caritas Aotearoa New Zealand co-hosted and supported the Mt Victoria meeting, having made submissions against the Sentencing and Parole Reform Bill.
Mr Givens questioned a rugby-mad country adopting not only the content but even the title of legislation derived from American baseball terminology. ‘But even in baseball, a player is going to have more than one turn in a 90-minute game – they are going to come back.’
He said the legislation results from politicians who are good ‘marketers of fear’ and have built a distrust of judges, who traditionally weigh the circumstances of each defendant when making sentencing decisions. ‘[Politicians are] saying to judges – we don’t trust you, you can’t be trusted to interpret the law, you are an insignificant part in the justice system and we are taking away judicial discretion.’
In the United States, at the same time as prison numbers were increased through three-strikes sentencing, Mr Givens said the state was simultaneously privatising prisons. ‘The most solemn of government roles is given to a company whose motivation is about profit making…We’re being driven into a profiteering system of punishment.’ New Zealand has also just passed legislation providing for privatisation of prisons.
Other impacts have included the growth of ‘tens of thousands of children left parentless’ as both mother and father are sentenced to 25-year terms. The prison population is aging as people remain behind bars for longer: ‘We have the world’s largest and most expensive old folks’ homes’. Violence is increasing in prisons, as prisoners have no motivation or reward for good behaviour, with over 40 riots taking place in Californian prisons each year. The state of California now spends over 17 percent of its annual budget on prisoners, compared to 0.8 percent on primary and secondary school education.
And despite all this, Mr Givens says there has not been any decrease in any class of crime or criminal. However, since he arrived in New Zealand, he has heard one statement by the proponent of New Zealand’s three-strikes bill, ACT MP David Garrett, with which he strongly agrees. ‘David Garrett said that if New Zealand enacts three-strikes legislation, there is no reason why we won’t expect the same outcomes as California.
‘It’s not something I would recommend you allow happen. You’ve got to speak up, you’ve got to share this information with people,’ Mr Givens urged the audience. ‘Don’t become an embarrassment to the rest of the world by doing something so stupid, so shortsighted. Don’t let yourself be lied to, don’t let the David Garretts of the world decide what’s best for you.’
Several Opposition MPs quoted from Mr Givens’ address, including Green MP David Clendon who attended the Mt Victoria meeting. Despite this, the Bill was passed 63-58, with the support of both National and ACT parties.