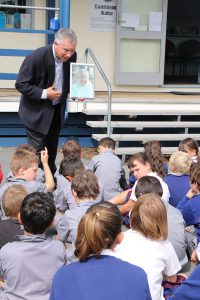 On a pastoral visit to Kaikōura in December, Cardinal John Dew brought a message of Pope Francis’ prayers for people affected by November’s severe earthquake.

At the parish school and marae, Cardinal John told communities Pope Francis had spoken to him in Rome in November to assure him of his prayers for people affected by the earthquake, and had asked for the prayers of people in New Zealand.

After listening to stories of people in Kaikōura affected by the earthquake Cardinal John said he was struck by the resilience of those he spoke to. ‘Many had lost material possessions or had damage to their homes, but were grateful few lives were lost. They appeared to appreciate and value their relationships and community connections even more than before the earthquake.’

The pastoral team heard first-hand accounts of some of the needs of Kaikōura people after the earthquake. Response priorities for the Archdiocese include support for families and children, caring for the carers who have worked so hard to support the local community, supporting young people, enabling parish and local community response, and working with tangata whenua.

Teams from Catholic social services and Challenge 2000 visited Kaikōura for a week in January to support community, parish and youth workers.

Donations to help those suffering from the result of the earthquakes can be made through Caritas www.caritas.org.nz/donate or call 0800 22 10 22. The funds will be disbursed in consultation with Cardinal John Dew and his Archdiocesan team