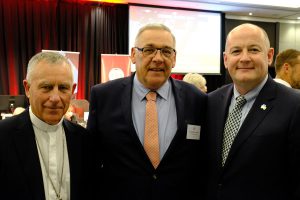 Recently appointed Irish Ambassador to New Zealand, Peter Ryan, was guest speaker at the second ‘Cardinal’s Lunch’, held in Wellington on 2 November. The series is a new initiative for people to hear from dynamic Catholic leaders in a professional forum and to encourage people to extend Catholic values in the workplace.

Welcoming around 200 guests, Cardinal John Dew said, ‘Pope Francis invites us to be leaders in our community. As Catholics we grow faith by pursuing holiness in our everyday lives. And in leading others to do the same.’

In an interview with Tim Gordon, Wellington-based actor, producer and director, Ambassador Ryan said that he and his wife Trish ‘are delighted to be here in New Zealand’.

‘My job here is to try and build strong connections between Ireland and New Zealand – based on our social, historic and cultural ties. I think I have the best job in the world to be welcomed by so many here who carry Ireland in their hearts’.

Ambassador Ryan spoke of his faith, professional life, his family and of the place of the Church in Ireland. He described how Catholic priests such as Fr Alec Reid played a very important role in facilitating the peace process in Northern Ireland, by going into troubled communities and talking with political leaders. ‘They are unsung heroes who we owe a huge debt to and continue to inspire people today.’

One of five siblings, Peter Ryan was born and grew up in Dublin. He went to Synge Street School and later to Belvedere College, a Jesuit secondary school, which imparted the strong Catholic values he lives by. He graduated with a Master of Arts in Political Science and Government from the University of Dublin and has since lived and worked in Australia, New York, Singapore, Hong Kong, Japan and Australia. He is the first resident Ambassador of Ireland to New Zealand.

The Cardinal’s Lunch was sponsored by LT McGuinness.