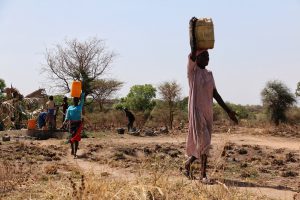 According to the UN the famine, brought about by civil conflict and drought, is affecting more than 100,000 people in Unity State. There are fears it will spread across the country to a further five million who are already struggling with a scarcity of food.

South Sudan gained its independence from Sudan in the north at the end of Africa’s longest running war in 2011. After a brief respite, the new country returned to unabated civil conflict in 2013, due to a power struggle between the president, Salva Kiir, and his vice president, Riek Machar.

I was in South Sudan last year to bolster Caritas’ response to the existing emergency and to help to develop a programme providing emergency supplies and water to thousands in desperate need. Many had experienced unspeakable atrocities against them or their family members and were traumatised. Many had been forced to leave their homes in a hurry, unable to carry many possessions, and they arrived at the makeshift camps with very little. What we’re seeing now is a humanitarian catastrophe. We are acting to prevent more people dying of hunger.

The situation has spread rapidly. The markets are failing and access to those most affected is limited by insecurity and poor roads. The lack of food means many people are suffering from malnutrition and some are literally starving to death. Currently, only Unity State meets the criteria for famine, but people across the country are desperate.

Only humanitarian intervention is enabling people’s access. Large parts of the country are experiencing limited access to food. People have lost their livestock and had to leave farming tools behind as they flee for protection. Families are searching for whatever food they can find, including water lilies and palm fruit.

Organisations have different areas of specialisation and respond based on assessed needs. We work with communities to identify their needs, as well as managing their expectations and maintaining their dignity.

In many cases, food needs to be trucked in. Where water can be accessed from a river or a borehole, it is tested and treated to ensure it is safe for drinking, and then distribution points are established to meet people’s needs. Roads are often impassable, and the insecurity makes it dangerous for aid workers to go to some of the most affected areas.

The UN have passed resolutions to increase the numbers of peacekeepers, but it is a huge country to manage and there are many fighting fronts. More needs to be done to negotiate peace between the different factions, and the international community needs to be serious about prioritising peace. Most of the population desires peace, to be able to feed their children and to send them to school.

I would ask New Zealanders to be united in their prayer for South Sudan for the establishment of a solution and for rains that enable people to grow their own food. I’d also like ask the government of New Zealand what they are doing to support the crisis, both at the negotiating table and in providing financial resources to those who are responding.