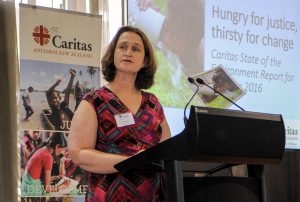 Cases of children having to eat cassava roots softened with paracetamol and people dying of starvation are among the examples of widespread hunger and thirst across the Pacific that are reported in the new Hungry for justice, thirsty for change, Caritas State of the Environment Report for Oceania 2016.
Launched by Caritas at parliament on 4 October – fittingly the Feast Day of St Francis of Assisi – the report shows the region’s basic food and water supplies have been severely impacted by a very strong El Nino weather pattern. It has compounded the effects of serious emergencies like Cyclones Pam and Winston and the ongoing effects of climate change.
In answering Pope Francis’ call to include care for our common home in the works of mercy, it is imperative we all act to reduce our carbon footprint. There are things we can all do in the face of environmental challenges, for example, reduce air travel, move to electric vehicles, use vehicles less, eliminate use of plastic bags and other harmful packaging.
Five environmental impacts are discussed in the report with the following actions recommended.
Food and water
Take steps to grow more of our own food, and support locally produced food, rather than depend
on imported foods.

‘May the works of mercy also include care for our common home… As a corporal work of mercy it requires simple daily gestures which break with the logic of violence, exploitation and selfishness and makes itself felt in every action that seeks to build a better world.’ – Pope Francis

Coastal erosion and sea-level rise
Become informed about the impact of sea-level rise on vulnerable communities throughout our regions, and monitor the responses of local and central governments. 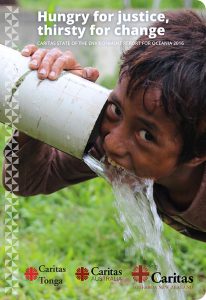 Climate finance and the Paris Agreement
Reduce our carbon emissions by considering our own financial investments, superannuation funds and electricity providers, and engaging with political leaders to call on urgent national action, as an act of solidarity with all Pacific peoples.
Deep-sea mining and prospecting
Become informed about plans for offshore oil and gas exploration and deep-sea mining in our own countries and throughout our region, and share concerns with decision makers.
Responding to emergencies
Ensure preparation for local disasters, and get to know neighbours and communities to support each
other during severe weather events and other emergencies.
For more information or for a copy of the report, please visit Caritas online at www.caritas.org.nz or call Caritas on 0800 22 10 22.

Caritas has welcomed New Zealand’s ratification of the Paris Agreement on climate change, announced on 5 October, but calls for concrete action to back up the decision. The move by New Zealand brings to 14 the number of Oceania nations that have ratified the historic global climate agreement made last December in Paris.
‘We hope this signals a clear shift in the New Zealand Government’s commitment to address climate change,’ says Caritas Aotearoa New Zealand Director Julianne Hickey.
‘And that it will enable us to respond quickly to our Pacific neighbours who are facing the brunt of climate change now.’