The report was launched on St Francis Day during the week-long Caritas Oceania Forum, held at the Home of Compassion, Island Bay, Wellington. Some 30 delegates from 11 countries or territories attended, including representatives from Fiji, Kiribati, Tonga, Samoa, New Caledonia, Caroline Islands, Solomon Islands, Papua New Guinea, Australia and New Zealand. Several delegates shared their stories about climate impacts and actions from their own countries. Also attending were representatives from the international Caritas network.

Following celebration of a Mass at the Home of Compassion Chapel, Monsignor Gerard Burns, Regional President for Caritas Oceania, welcomed the Caritas Family to the launch. Monsignor Burns said the oceania region, a creation of natural beauty, faced immense challenges in terms of climate change including humanitarian emergencies through sea-level rise and stronger cyclones bringing destruction of building and loss of life.

‘Three years ago, in his encyclical Laudato Si’, Pope Francis wrote about the social, ecological, rich and poor divide, about caring for our common home. Francis said we are facing one single crisis with two dimensions in which we need to hear the cry of the earth and the cry of the poor. Laudato Si’ tells is as Catholics we all have a voice and a role to play

‘This fifth report, Waters of Life, Oceans of Mercy, is about all the connections we have in solidarity with our earth: whare whakawhenua tangata,’ Monsignor Burns said. 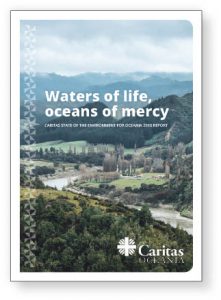 In its report Caritas Aotearoa has called for an integrated approach to tackling climate change that prioritises the needs of the poor.

Caritas’ call came a few days ahead of the release of a Special Report by the Intergovernmental Panel on Climate Change (IPCC) on the impacts of global warming of 1.5°C above pre-industrial levels. (Caritas’ response to the IPCC report is below.)

People have already died in the struggle against climate change says Director, Julianne Hickey. ‘The poorest people in the Pacific are on the frontlines – those on coastal edges, or reliant on subsistence supplies. For us in Oceania, the 1.5°C target is an imperative for survival.

‘The witness of five years of our reports on environmental change in Oceania is climate change is here and now. Many communities have been feeling the impact of extreme and violent weather patterns, or the slow encroachment of the sea for several decades. We need a dedicated focus on small and isolated communities, and marginalised groups most vulnerable to sea-level rise, food and water security and weather pattern changes.

Caritas’ report puts a human face on how climate change and other environmental issues are affecting people dependent on the oceans, freshwater and healthy sustainable land use for their survival, livelihoods and identity. It tracks five key environmental issues:

‘We also need to face the reality that displacement is happening; often unplanned, unco-ordinated; and unsupported by local and national governments and other relevant agencies,’ Mrs Hickey said. ‘Relocation is always a last resort, as the spirituality, identity and wellbeing of many Oceania people’s is tied up with the land and oceans of their ancestors.

“The community of nations gathering this December in Poland for the next United Nations climate change conference (COP24) must focus on finalising the Rulebook for the Paris Agreement on climate change so as to keep global temperature rise below 1.5C.” – Julianne Hickey

‘That is why global climate finance – must benefit people on the frontline of harm.
Our assessment of climate finance for the most vulnerable has shifted the dial to “woefully inadequate”. Climate finance must not impose further foreign debt and burden on Pacific peoples. It must support a just transition that promotes capacity building and technology transfer.’ 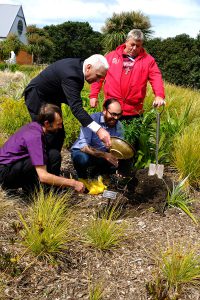 Following the launch of the State of the Environment report for Oceania, Henare Walmsley, board member for the Home of Compassion, led the planting of a kōwhai tree in the Home of Compassion grounds to celebrate the work of the Oceania forum. He explained, ‘the tree gives thanks to Tane Mahuta who looks after the realm of the trees and forests of this world. This is our token of appreciation, a koha, a gift, to the Home of Compassion in allowing us, Caritas Oceania, to share our stories and to learn from each other.’

‘The community of nations gathering this December in Katowice, Poland, for the next United Nations climate change conference (COP24) must focus on finalising the Rulebook for the Paris Agreement on climate change so as to keep global temperature rise below 1.5C,’ Mrs Hickey said. ‘Nationally determined contributions and climate finance must align to meet that target.’

Caritas Oceania Forum attendees said the 2018 State of the Environment Report for Oceania was ‘an attentive listening to the sea, land and peoples of Oceania and amplifies the voices of the region’s most vulnerable communities affected by climate change.

‘It calls for action, focussed on ensuring global commitment to the Paris Agreement and climate finance measures to limit global warming to 1.5 degrees. It provides
an important basis for Caritas Oceania members to pursue their work and advocacy more actively.’

Monsignor Burns encouraged everybody to talk about climate change in the wider communities: at work, at home, with local government, and with national government.

‘Talk about it, bring it up in conversation. We can all be active and need to be activists. What we do about it is over to me, over to you, over to us.’

To request a hard copy of the report, please contact Karl Corney on email karl@caritas.org.nz or phone 021 190 9908. 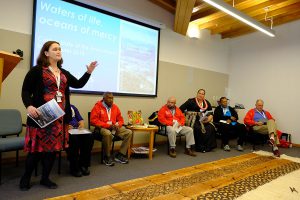 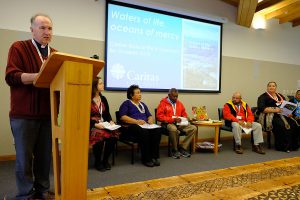 ‘Alarm bells should be ringing in the corridors of power’ 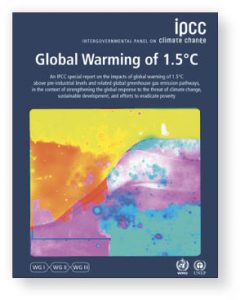 The Intergovernmental Panel on Climate Change (IPCC) has provided a special report on the impacts of global warming of 1.5°C above pre-industrial levels and related global greenhouse gas emission pathways. The report, Global Warming of 1.5°C, released on 8 October, is in the context of strengthening the global response to the threat of climate change, sustainable development, and efforts to eradicate poverty.

Responding to the IPCC’s latest special report, leaders of Catholic development agencies around the world have launched an urgent call for action, saying there isn’t much time available to tackle the crisis without running into terrible consequences.

Julianne Hickey, Director, Caritas Aotearoa New Zealand said, ‘There is a groundswell of concern about the current track we are on. The IPCC report shows urgent changes are needed to prevent a disaster developing. Alarm bells should be ringing in the corridors of power in Wellington, Canberra and around the world.

‘We simply cannot keep going the way we are going. The time for a major shift in direction has arrived. Caritas has called for significant changes in the way local communities are engaged with in the Pacific in its State of the Environment Report in Oceania 2018.’

CIDSE, an organisation which represents leaders of Catholic development agencies working together in more than 120 countries to promote social justice, has reacted to the IPCC report with an urgent call for climate action.

‘The next United Nations Climate Change conference (COP 24) must be a milestone in the implementation of the Paris Agreement signed three years ago. Governments, as the IPCC report says, must imperatively and swiftly raise ambition: the reality is we are on a warming pathway of 3.5°C or more ‒ pointing at a huge gap with the 1.5°C objective. Limiting global warming to 1.5°C is a matter of survival for all and it is feasible through bold political actions: the barriers to fighting climate change are political. Now more than ever we need leaders to acknowledge and take actions to curb our current emissions trajectory.’

The Intergovernmental Panel on Climate Change (IPCC) is the international body for assessing the science related to climate change. The IPCC was set up in 1988 by the World Meteorological Organisation (WMO) and United Nations Environment Programme (UNEP) to provide policymakers internationally with regular assessments of the scientific basis of climate change, its impacts and future risks, and options for adaptation and mitigation.

IPCC assessments provide a scientific basis for governments at all levels to develop climate-related policies, and they underlie negotiations at the UN Climate Conference – the United Nations Framework Convention on Climate Change (UNFCCC). The assessments are policy-relevant but not policy-prescriptive: they may present projections of future climate change based on different scenarios and the risks that climate change poses and discuss the implications of response options, but they do not tell policymakers what actions to take.