The Executive Committee of the Federation of Catholic Bishops Conferences of Oceania (Australia, Papua New Guinea and Solomon Islands, New Zealand, CEPAC – the rest of the Pacific) met in Auckland during August to focus on the place of the sea in the lives of the peoples that they as the Bishops of the Pacific serve. 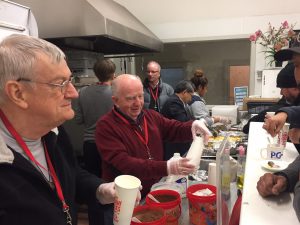 The Bishops at work in Auckland City Mission. Photo: Supplied

Representing Australia, New Zealand, PNG and island-nation States from throughout the Pacific Ocean, the Bishops said in a joint statement, ‘Our common ocean is teeming with life and goodness. For many of our peoples the sea is their treasured source of nutrition, sustenance and livelihood. In solidarity with them, Psalm 107 resonates in our hearts: ‘those that do business in the great waters, they behold the world of the Lord and his wonders in the deep’.

‘We are acutely aware of the impact of climate change on island nations and some of our number have been visiting communities and recording the destruction of shorelines affecting them.

‘Our interest in the “Blue Economy” is to uphold a model of development that respects the importance of sustainability beyond any perceived short-term economic windfall. Members of Parliament and local governors and other civic authorities have a duty to promote long-term economic and social development and to be vigilant in guarding against any attempts by international businesses to exploit our common resource.

‘We are heartened to learn of the systematic and coordinated opposition to seabed mining which turns the ocean floor into a stage of exploitative destruction of ocean habitat. We are not ‘anti-development’. We applaud government, community and private initiatives to develop water ecotourism and sustainable sea fishing. We look to the common good and advocate for an integrated approach to development where local customary practices are respected and communities are assisted to grow employment opportunities.

The Bishops also focused on the livelihood and cultural integrity of the people of West Papua. ‘While not promoting a view about independence, care to uphold and strengthen local institutions of democracy may be overlooked. We echo the call for quality education in Papua, for fair and transparent access to jobs, training programmes and employment, for respect of land titles, and for clear boundaries between the role of defence and police forces and the role of commerce. The large majority of indigenous people of Papua seek peace and the various dialogue groups, advocating and witnessing to peaceful co-existence, are a source of hope for all.

While in Auckland, the Bishops visited De La Salle College in South Auckland, and celebrated Mass with the school community. They also visited the City Mission and served meals to the homeless, the mentally unwell and those suffering economic deprivation. The Bishops said it was a humbling experience during which they felt deeply Christ’s call to sit and walk alongside those who struggle or find themselves on the margins of society.

The Bishops’ statement concluded with reference to Pope Francis’s encyclical Laudato Si’ that opens with the canticle of Saint Francis of Assisi who also reminds our generation that ‘our common home is like a sister with whom we share our life and a beautiful mother who opens her arms to embrace us’.

The Bishops of Oceania Assembly theme in Port Moresby April next year will be – ‘Care of our Common Home of Oceania: A sea of possibilities’.