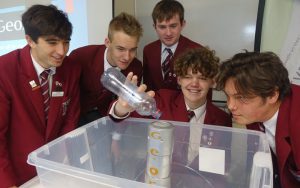 St John’s College, Hastings, won one of only four national excellence awards from over 960 Young Enterprise Teams (YES) nationally, announced on 24 October. On 6 December, the student Directors of project GEORGE, Principal Paul Melloy and community partners from What Ever It Takes (WiT), the Hawke’s Bay regional mental health service provider, will travel to Wellington for the National Excellence Award ceremony. The winner will be announced at a gala dinner attended by the Governor General, and government and business leaders.

GEORGE is the name of a product the students created using PCV piping and a computer programme. The low-cost device monitors rainfall and floodwaters and sends real-time updates by text message to a mobile phone, with the potential to save lives and properties. The College, together with Hawke’s Bay Prison also won the National Arts Access Whai Tikanga Award 2018 for their successful YES project developed last year. The award was one of eight presented at Te Putanga Toi Arts Access Awards 2018, on 1 August, at Parliament Hall. Principal, Mr Paul Melloy attended on behalf of the College.

A group of Year 12 students at St Mary’s College Wellington, have set up a business called The Final Straw as part of YES. It involves eco-friendly alternatives to plastic straws and marketing materials to communicate environmental sustainability. They pitched their enterprise at the YES Wellington Regional Final in October and received the Financial Management Award, the Social Impact Award, and were named the YES Company of the Year for the Wellington Region. They will attend and compete in the National Final in December with 19 other teams. They also won one of ten National Excellence Awards to be awarded at the Nationals.

St Mary’s College Year 10 team of Catherine Connolly, Maddie Heffernan, Chloe Tinney and Annie van Kampen, won first place at the Institute of IT Professionals Wellington Regional digital challenge for their app ‘Encourage Mint’. The app aims to get young people feeling better about themselves and happier overall and was developed in response to time on phones negatively affecting health. Second place also went to SMC. Both teams will attend the Tahi Rua Toru NZ Digital Challenge on 5 December.