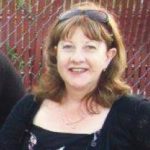 When people are asked ‘what is Conscience’ they will often respond that it is the ‘inner voice’ they hear or feel directing them when making choices between right and wrong. Richard McBrien refers to conscience as the ‘innate sense of the difference between good and evil’. So even when people disagree about the specifics of what is right and what is wrong there is still a general consensus that ‘there is a difference between right and wrong’.1

While conscience is definitely a personal experience this ‘innate sense’ can also be seen operating at a social or public level. In New Zealand people are free to conscientiously object to participating in particular actions or tasks that go against the grain of their conscience or moral code. And in Parliament our politicians are sometimes freed to vote for legislation in line with their own personal conscience rather than along their agreed party lines. But while we all have a conscience in common we do not have a common conscience. Not all consciences are shaped or formed in the same way and so there can be a wide range of different conscience positions.

“While we all have a conscience in common we do not have a common conscience.

For Christians the formation of conscience is primarily an act of faith and reason that occurs within our shared tradition – which is rooted in scripture and articulated through Church teaching and tradition. In scripture, the closest word to what we understand as conscience is heart; and the essential key to opening your heart to God, is to listen. In Psalm 95 we read that Israel is asked not to ‘harden their hearts’ but rather to ‘listen, today, to what The Lord says’. And the prophets are constantly reminding Israel that their Covenant with God is accessible to all because it is ‘written deep within your hearts’ (Jer 31:31). Likewise for Paul, conscience is the law or the knowledge of God that is ‘written in our hearts’ (Rom 2:15). And while Paul acknowledges that we must be obedient to the law written within our own hearts, he also admonishes us to take care our actions do not put those ‘whose conscience is weak in some matters’ in danger (Cor 8:9-13). So as we see from the scriptures, the formation of our conscience, while always a personal action, can never be solely individual but is also a communal concern.

“As we see from the scriptures, the formation of our conscience, while always a personal action, can never be solely individual but is also a communal concern.

Church teaching on conscience was summed up beautifully at Vatican II in their Pastoral document Gaudium et Spes where conscience is described as ‘people’s most secret core, and [inner] sanctuary [w]here they are alone with God whose voice echoes in their depths’. Here the Council affirms that ‘deep within themselves men and women discover a law which they have not laid upon themselves and which they must obey’. Echoing Paul and the prophets of the Old Testament the Council reminds us all that because the law of conscience is ‘inscribed in [our] hearts by God’ our ‘dignity rests in observing this law, and by it [we] will be judged’2 (GS n.16). 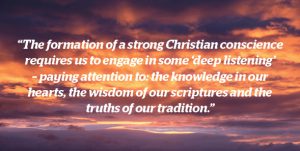 One of the most misunderstood elements essential to the formation of the Christian conscience is the call to obedience. The word obedience actually means ‘to listen’. It comes from the Latin root obedire, which literally translates as ‘pay attention to’ or ‘to give ear to’. In our contemporary secular world, obedience to anything outside our own independent feelings or desires is seen as a threat to our personal autonomy. So, the call to form our conscience through the attentive ‘listening’ to scripture and tradition can be dismissed as weak or immature. However, our faith experience would tell us quite the opposite, affirming that because the voice of our conscience has been placed ‘deep within our hearts’ then the key to understanding this conscience must be an attitude of ‘deep listening.’

Accordingly, the formation of a strong Christian conscience requires us to engage in some ‘deep listening’ – paying attention to: the knowledge in our hearts; the wisdom of our scriptures; and the truths of our tradition.

Conscience does not require that we merely follow the rules, nor can it be reduced to a personal feeling or individual desire. Rather conscience needs to be formed in community, through an understanding of scripture and tradition that is brought together in prayer.

True conscience is, as St Paul would claim, an invitation to ‘grow both in knowledge of God and love of neighbour.’

2. The Pastoral Constitution on the Church in the Modern World, n. 16