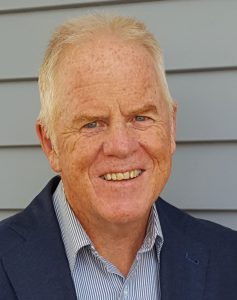 WelCom September 2017: Vincentians from around the world and throughout New Zealand will gather in Christchurch for a weekend of anniversary celebrations in October.

This year the St Vincent de Paul Society celebrates 150 years since it was first established in New Zealand. The first Conference was formed in Christchurch in 1867 and has flourished in Catholic parishes throughout New Zealand since then. Today the Society has around 6000 members in New Zealand, including associates and volunteers and 135 Conferences.

Anniversary celebrations are planned for the weekend of October 13–15 in Christchurch. On Sunday October 15, Apostolic Nuncio Archbishop Martin Krebs as well as Bishops Owen Dolan and Charles Drennan will celebrate an anniversary Mass. Representatives of countries with which New Zealand has ‘twinning programme’ arrangements including Tokelau, Tonga, Sri Lanka and Samoa will attend the celebrations. Other international guests will include the Council General and International Representative, Tony Muir, and International Territorial Vice-President, Frank Brassil.

‘The weekend will be a wonderful opportunity to give thanks to God for all the blessings the Society has enjoyed over 150 years,’ says Terry Comber, National President of the Society. ‘We remember especially our brother and sister Vincentians on whose shoulders we are standing, those caring people who have gone before us over many decades, carrying out their Vincentian vocation often under very trying conditions.’

In addition to the Christchurch celebrations, local Conferences are also hosting local events and celebrations. 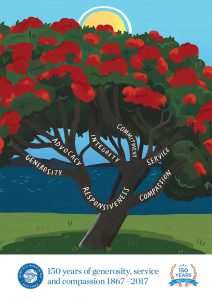 The Society of St Vincent de Paul has published a special Anniversary Publication to mark this major milestone in its history. It includes a visual timeline of the major milestones in the Society’s 150-year history, as well as reports about what local Conferences have been doing around the country. In his message to Members, Cardinal John Dew said, ‘the Church in New Zealand and New Zealand society owes an incredible debt of gratitude to St Vincent de Paul Society members who have worked quietly and humbly to care for others in the name of Jesus.

‘I offer deep thanks for the way you have been Christ’s presence to those who needed a sign of hope and a gift of love and generosity.’

The Society of St Vincent de Paul is the largest Catholic lay organisation in the world. It is estimated its 800,000 members work with around 30 million people in need worldwide.

The Society was founded at the Sorbonne in Paris in 1833. The first Wellington Conference was formed in 1876 at Sacred Heart Parish, Thorndon, by Fr Jean-Baptiste Petitjean sm and Scotsman Charles O’Neill. The Society’s practical brand of Christianity has flourished in
New Zealand.