‘He could be deaf but I don’t think so. If he’s not deaf he’s probably brain-damaged, emotionally disturbed or mentally retarded.’
So said the audiologist who tested my two-year-old’s hearing, because he was not talking and appeared to be detached from the world around him. ‘Why?’ my husband said. Then, ‘I was going to say “Why us?” I suppose why not us. Somebody has to have these things happen to them.’
We all start off thinking that our children will be different by which we mean better. They will be well brought up by enlightened, understanding parents – no thought of disability in our family. 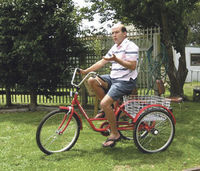 These days attitudes are much the same, except that any indication of disability presents a choice of whether to proceed with the pregnancy. I’m glad I didn’t have that choice. Are we to value people less because they have these difficulties? One could have offspring who turn out to be nasty or drug-addicted.

Eventually, after going the rounds of various specialists, our son was diagnosed with early childhood autism. If we had been in New Zealand at the time the diagnosis would have taken much longer. Very little was known about autism in New Zealand in the 1970s and parents were simply patted on the head and told not to worry and things like, ‘Einstein didn’t talk till he was four’. None of this was helpful.

All the literature about autism available from Britain and America advocated early intervention and programmes tailored to the specific needs of the child. However, unlike Britain and America, there were no schools or centres specifically for autistic children with very challenging behaviour and learning needs. IHC ran day care centres for preschool children with various intellectual disabilities and for those excluded from school because of the severity of their disability. Here was the shock: these children did not have a legal right to education. If the special school couldn’t cope, for example, because it was understaffed, you could be told to keep your child at home. This happened to us and to others we knew. It wasn’t till 1987 that the law defined education as a right for all children.

So began a process of finding help—speech therapy, IHC day care, then the normal kindergarten, in the hope that being with normal children might assist the development of speech. We tried out different programmes at home to develop skills which for normal children are taken for granted. We dealt with eating difficulties and behavioural problems, people looking at our child behaving badly in public and wondering, indeed commenting, about why he wasn’t better disciplined. Our other children were mocked about their ‘funny brother’ while playing in the park.
And there were times when, having no sense of danger, he would run off. Once he got on a bus and rode all the way into town until the driver realised that this funny kid didn’t seem to be going anywhere. Another time there were six policemen, three cars and two dogs searching our neighbourhood for him. Our boy had an amazing knack of finding some way of climbing through or over.

There were many joyful situations made all the more so because of the difficulty in getting there. Any small step was a cause for celebration. We hired a psychologist to help us toilet-train our son when he was nearly five years old. I will always remember the day he went to the toilet unprompted. Then in true autistic fashion he kept going umpteen times a day. It’s still his favourite place—the first thing he looks for wherever he goes.

We used behaviour modification techniques to help him to understand simple instructions. I taught him to come when he was called rewarding him with jellybeans. He learned to ride a tricycle—he now has an adult one, and to do simple tasks such as hanging out the washing, clearing the table, drying the dishes (albeit on one corner of the tea towel).
I think of the friendships with other parents of children with autism. I was national secretary of the Autistic Association for 10 years as autism was becoming known and recognised.

Friends who nervously undertook to mind him would discover toothbrushes and bathroom plugs in their loos or have their toilets flushed over and over because water is so fascinating. Then there was the special friend who accompanied him to kindergarten to make sure that he joined in all the activities.

At 39 years of age my son cannot speak, read or write. As if autism weren’t enough, he developed epilepsy when he was 16. He still doesn’t sleep well – a lifetime of sleepless nights for him and his caregivers. He likes to jump from tables and benches and has major tantrums. He can dress himself and do most personal care though with some supervision. He understands concrete statements and requests and he has a sense of humour. He likes to be part of a celebration because he seems to have a sense of occasion.

For families, caregiving is never finished because maintaining the quality of care needs constant attention even though their family member may be in an adult home for what is described as those with ‘high needs’. Caregivers are usually poorly paid and not always well trained. There is a high turnover of staff, understandably in such a demanding occupation.

It seems to me that the mark of a caring society is reflected in the way that we care for the most vulnerable. Having a disabled child in our family has enhanced our lives. But despite the huge cost, I can’t imagine life without him.