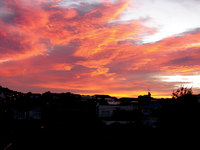 It is now well accepted that the high consumption lifestyles of the richer nations and wealthy elites throughout the world are primarily responsible for the most threatening ecological challenge facing the planet – climate change.

Public understanding of the issues around climate change has increased remarkably in New Zealand over the past year and the debate is no longer the preserve of scientists. Since February 2007 a deliberate government effort influences the purpose and direction of the debate. Government ministers urge us to be smart in our responses to a variable climate in a carbon-constrained world.

The Catholic Bishops of New Zealand have noted that our faith and religious tradition have much to offer. They stress that the issue of environmental justice evokes solidarity with the poor and respect for the common good. The Anglican bishops highlight belief about the care of God’s creation and the sacred integrity of the earth. We are part of our environment, with the power to change it for good or ill.

Thomas Berry, a noted cultural historian and Catholic priest, holds that the crisis arises from the simple question of whether economic profit, or the integral functioning of the planet, will be the normative value in guiding the human community into the future.

We are told that New Zealand’s natural resources and equable climate, combined with an entrepreneurial and creative population, are the basis for competitive advantage as a small trading nation in the South Pacific. A good spirit of participation and collaboration makes sense at this stage of the deliberations.

Looking out over the next 30-40 years, the effects of climate change, and the global response to it, will present challenges to New Zealand about a future capacity of where we shall be as a society and economy. Decisions in 2007 are shaping the decades and the generations ahead.

In the search for solutions for the common good, the Catholic community must surely contribute in more positive ways. The religious and ethical questions over global warming raise expectations of a vigorous contribution from a faith and moral perspective. Two central questions come from the UK and the USA.

First, how are we to fulfill God’s call to be stewards of creation when we have the capacity to alter that creation significantly, and perhaps irrevocably? Second, how can the family of nations respect and protect the integrity of God’s creation, while providing for the common good and economic progress?

My personal perspective is prophetic mission. I pay attention to these matters because I am motivated to be Catholic in terms of justice and peace, dialogue and integrity. This is my way to be in the world, to see it as it really is, and to make sense of it. I have been around long enough, and with experience enough, to know what perpetuates poverty, human rights violations, conflict and environmental destruction.

My concern in the debate is about how decisions affect the lives of ordinary people, and how they impact on planet Earth. If powerful affluent interests dominate, the voices of the poor are likely to be muted and their needs ignored. A foundation of social and economic justice does not put the poor at greater risk, nor place disproportionate and unfair burdens on the developing nations.

Deep down I am convinced that we Christians must re-awaken our sensitivities to creation and to life. If we can avoid getting lost in the mathematics, we might re-invent ourselves, experience ecological conversion, and join in the grand liturgy of the universe.