St Vincent de Paul’s feast day is on 27 September. St Vincent de Paul (1581‒1660) was a French priest who devoted his life to serving the poor. He was renowned for his compassion, humility, and generosity. Canonised in 1737 he is known as the ‘Great Apostle of Charity’.

The Society formed in his name has its origins in 1833 in Paris. It was established at a time when religion was in decline and the Church under attack for a lack of relevance and action.

Putting faith into action, letting actions speak for themselves, became the driving force for the founding group of six students, the leader among them Frederic Ozanam. The Society was first called the ‘Conference of Charity’ but was later re-named The Society of St Vincent de Paul.

The Society spread swiftly round the world and has become the largest Catholic lay organisation in the world with around 800,000 members. 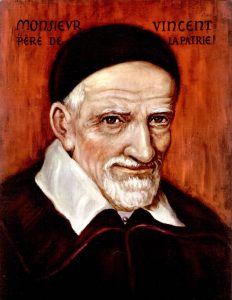 Here in New Zealand the Society has 4,600 members, including Conference members, Associates and young Vinnies. Week in, week out, this dedicated army of volunteers goes about visiting the elderly and lonely, providing meals and assisting with school fees, delivering firewood, visiting prisoners, helping the disabled find work, running foodbanks, providing transport to hospital appointments, raising funds for the victims of natural disasters, doing whatever is required to support people in need.

We live in a time when the Church is once again under attack for a perceived lack of relevance and authenticity. Scandals and divisions have severely dented the Church’s moral authority.

There is much to be learned from the young founders of the Society of St Vincent de Paul who, at a time of crisis in the Church, did not set out to preach but to serve; not to judge but to walk beside those in need. There was no great fuss or fanfare. There was simply Gospel action. Faith alive.

The charism of the Society is as relevant and urgently needed now as it was when the Society was founded.

There’s work to be done. Come and join us.