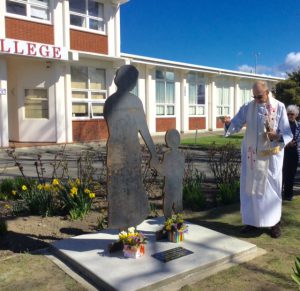 A pioneering group of women who founded the Catholic Women’s League Masterton Branch in 1945, were remembered at a blessing and dedication ceremony to unveil a sculpture crafted in their honour.

Held on Saturday 3 September at Chanel College, Mrs Elaine Beck welcomed guests to the dedication and unveiling of a life-size, iron silhouette image of a woman holding the hand of a young boy, sculpted by renowned artist Nico Thomsen.

College principal Mr Grant Miles greeted guests and expressed his gratitude for the fine image that now graces the entrance to the college. Mr Peter Jenkins, the first boarder at St Joseph’s College hostel (now Chanel College) in 1946, spoke of how boarding for a farm lad was a new experience and how the CWL women’s presence around the hostel made a difference. Brother Carl Tapp spoke for the Marist Brothers and praised

Fr Moore – founder of the Masterton CWL branch – for his foresight and for the support the brothers had received from all sectors of the community.

In 1945 Fr Moore set up a CWL branch in Masterton. With the help of the CWL women, a fully-furnished hostel to accommodate 21 boys at St Joseph’s College was opened in January 1946. For several years the women fed, cooked, cleaned, mended, took washing home, and looked after sick boys in their own homes. Two daughters of these pioneer women, Mrs Judy Hooper and Mrs Jill Nelson, placed flowers at the memorial as a tribute to the women’s ‘selfless generosity’.

The CWL 70 years’ presence in Masterton ended in October 2015. However, the pioneering CWL women will be honoured with a permanent reminder of their ‘faith and service’, with the iron silhouette in front of Chanel College. The women have left a priceless legacy and a heritage of faith strongly bound up in Chanel College’s motto ‘All Through Christ’.

Monsignor John Carde, a recipient in 1947 of the women’s kindness, spoke of his happy years at St Joseph’s College, the influence of the priests, brothers and sisters on his life, CWL support at the hostel and those associated with the early years of St Joseph’s College. Monsignor John said, the ‘trace elements’ of the CWL presence will be forever remembered. He prayed for the women, blessed the monument and invited others to do the same.