The Season of Creation begins on 1 September, the Day of Prayer for Creation instigated in 2015 by Pope Francis. It ends on 4 October, the Feast Day of St Francis of Assisi, the Catholic Church’s patron saint of animals and the environment. 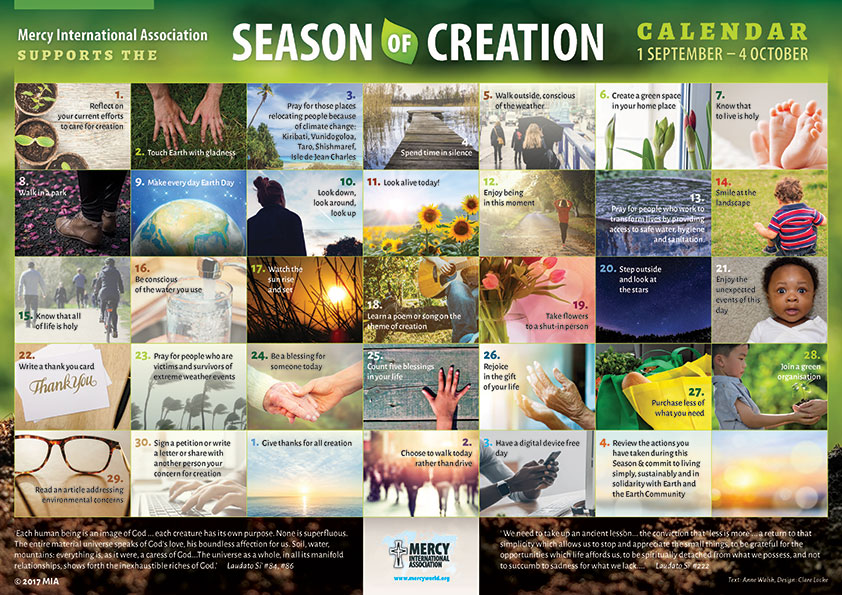 ‘We have through Laudato Si’ been issued a summons to a profound interior conversion, to renew our relationship with God, one another and the created world.’ – Cardinal John Dew

WelCom September 2017: On 1 September this month, the third special Day of Prayer for Care of Creation is celebrated. Pope Francis instituted this annual day of prayer in 2015 based on his encyclical Laudato Si’. The Day of Prayer calls on every person living on this planet to care for our Common Home. Pope Francis says the Day of Prayer gives individuals and communities an opportunity to ask for God’s help in protecting creation and to ask for His forgiveness for sins committed against the world in which we live.

Last month, Cardinal John Dew celebrated Mass at St Patrick’s Cathedral in Auckland for the Australasian Catholic Press Association Conference. The conference theme was: ‘Communicating for Our Common Home’. During his homily, Cardinal John reminded delegates that Pope Francis has clearly told us in Laudato Si’, that healing of our created world is needed more today than ever.

‘Humanity has not cared for Our Common Home, we have used this gift of God for our own selfish purposes, we have squandered God’s resources. We have deprived many of our sisters and brothers of their livelihood, turned the underwater wonderland into watery cemeteries, and have acted in way that prevents many having clean water.’

Cardinal John said, ‘We all have a duty, a task of communicating for our common home. It is God’s home, it’s our common home; it will only be protected and saved when we urgently communicate that we are all responsible for caring to this gift. We have, through Laudato Si’, been issued a summons to a profound interior conversion, to renew our relationship with God, one another and the created world.’

From 1 September to 4 October, Christians around the world are praying and caring for creation during the ‘Season of Creation’. [seasonofcreation.org]