A Prayer for Sea Sunday

Be with Seafarers, Lord, on all their voyages, to cheer them and keep them safe in all dangers. Let nothing afloat or on shore cut them off from you. May they please you in everything they do. Bless all on board their ship, whatever their responsibility. Enable everyone to do their duty. Help them to be good shipmates and bring them back again safely to their homes and to those who long for their return, through Jesus Christ, our Lord. Amen. 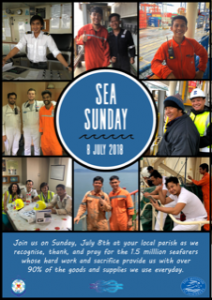 Last February, Rob and Jess Armstrong our Stella Maris managers in Lyttelton, were notified by the International Seafarers Welfare and Assistance Network (ISWAN ) that a ship was heading towards Lyttelton with wages unpaid. They contacted the NZ Maritime Union and Maritime NZ impounded the ship until the case was resolved before sailing.

It may be easy but undeserving for some Catholics to regard this as a minor or negligible mission within the New Zealand Catholic Church. Wider public awareness and support has a huge impact on 1.5 million seafarers not to mention all the families who love them. Because Stella Maris advocates for the least employable, the worst exploited, the most underpaid and highest physically and sexually abused workers on this planet our work is right up there and effective. It is not only an overseas thing. Two seafarers have been murdered in New Zealand waters in the last two years and they are only the known ones. Many seafarers in our waters have their passports held by someone over them so they are prisoners and many are housed in vessels globally known as ‘rust buckets’. Pope Francis calls these people ‘our modern-day slaves’. We provide spiritual care as well as employment and personal welfare since 80 per cent of the world’s 1.5 million seafarers are Roman Catholic.

The New Zealand Government has just given us a lot more power to provide welfare and advocacy for seafarers. The Church from now on is going to been seen much more in the media advocating for maritime workers and we will be seen a lot more as frontline and effective in our work. This is going to benefit the Church’s reputation. Bad treatment of seafarers has bad consequences for us all as consumers, since 90 per cent of all we use comes by ship. We have justice work to do.