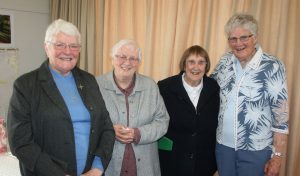 Born and raised in Lower Hutt, Patricia Mary Hannary was educated at Ss Peter and Paul Primary School and Sacred Heart College. Aged 18, on the feast of St Brigid 1 February 1956, Trish joined the Brigidine Sisters. Leaving her home and five siblings, she entered the novitiate in Randwick, Sydney.

Life there meant early rising, manual labour, silence and prayer. After three years Trish returned to the Brigidines in New Zealand, then a semi-closed order. Trish made her first profession in Randwick on 6 September 1958 and her final profession before Archbishop McKeefry in Masterton on 6 September 1961. Her first teaching school was in Pahiatua, followed by time in Featherston, Khandallah and Auckland. She was later principal at Holy Family School, Porirua, then St Pius X School, Titahi Bay.

After caring for her mother, Trish returned to the Brigidine community in Khandallah when her mother died. Trish travelled daily to St Bernard’s College in Lower Hutt, then moved to the Hutt and continued working at St Bernard’s for many years.

After retiring, Trish became a parish worker in her old parish, Ss Peter and Paul, and was a much-loved and hard-working friend to priests and parishioners.

Trish now lives at a retirement village in Whitby where she has found a new apostolate among the villagers and her parish of St Theresa’s, Plimmerton.