This year marks the 30th anniversary of the death on November 29, 1980, of Dorothy Day, the famous US convert to Catholicism, who transformed the way modern Christians need to live their faith. 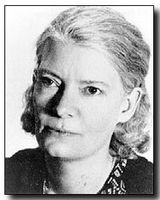 Dorothy Day left a legacy of living the Beatitudes and the scriptures every day.
She started a movement of pacifism and opposition to war, voluntary poverty, the practice of nonviolence, farming communes, active work for social justice and houses of hospitality based on seeing Christ in one’s neighbour, especially in the poor.

Dorothy Day was born in Bath Beach, Brooklyn, on November 8, 1897. Though she was baptised an Episcopalian, she had little exposure to religion. By the time she was in college she had rejected Christianity in favour of the radical cause.
She dropped out of school and worked as a journalist in New York with a variety of radical papers and took part in the popular protests of her day. Her friends were communists, anarchists and an assortment of New York artists and intellectuals, most of the opinion that religion was ‘…the opium of the people…’

A spiritual search
But Dorothy wanted more than just political activity. In her heart was a yearning for something deeper and more fulfilling. In 1926 she found herself pregnant to her common-law partner. She decided after much anguish to have Tamar, her baby, baptised into the Catholic Church, which she felt was open to the needs and aspirations of the poor.

A year later she took instruction and was herself baptised. This proved to be a momentous change for herself and for the American Church.

Her desire to do something special for the poor during what had developed into the Great Depression was constant. She prayed often and sought advice from many. How could she reconcile becoming a member of a church often equated with the wealthy with the call she felt to do something for the poor?

A portentous alliance
The answer came in 1932 with a providential meeting. Peter Maurin, a French-born itinerant philosopher, encouraged her to start a newspaper that would offer solidarity with the workers and a critique of the social system from the radical perspective of the gospels. The Catholic Worker was launched on May 1, 1933.
Like a true prophet, Maurin was concerned not just to denounce injustice but to announce a new social order based on the recognition of Christ in one’s neighbour.

In an effort to practise what they preached, Day converted the offices of The Catholic Worker into a ‘house of hospitality’ – the first of many – offering food for the hungry and shelter for the tired masses uprooted by the Depression.
Dorothy and Peter Maurin developed a plan of action based on the best of the church’s social teachings (which Maurin described as ‘hidden dynamite’) and the central teachings of the gospels.

In particular the Sermon on the Mount (Lk 6) and the spiritual and corporal works of mercy (Mt 25) became central platforms which gave impetus to their programme.

A Christian manifesto
Among key points enshrined in their plan of action was a commitment to:
• decentralised social structures,
• farming communes where ‘workers and scholars could work together’, pacifism and nonviolence which the early Christians had practised for three centuries,
• commitment to a life of voluntary poverty so ‘to each their need not their greed’ and to
• the recognition of the divine dignity of each individual through the practice of personalism.

As her movement grew, so did the paper to a high point of 150,000 copies each month by the early 1940s.
But it was never easy. She took a battering for her pacifist stance in the Spanish Civil War and during World War II and many deserted The Catholic Worker which was vilified as ‘unpatriotic’.

Many houses were closed for lack of volunteers. Despite this huge loss in popularity, Dorothy Day stuck to her convictions and the original Catholic Worker programme.

Nonviolent in prison
Dorothy continued to live and work among the poor for the following 50 years of her life. Her houses spread throughout the US.

She became a leader of the peace movement during the Cold War era, was arrested several times for nonviolent direct action against injustice, was a strong proponent of the philosophy of nonviolence in the face of rising militarism during the 1960s and became an iconic figure for many during the Vietnam War. The Catholic Worker monthly continued to thrive and remains the flagship paper of the CW today. It has spawned many offspring including The Common Good, a quarterly publication of the CW in New Zealand.

In the 77 years since its founding, The Catholic Worker and the work of Dorothy Day has spread to many countries.
In Aotearoa/New Zealand there are three CW farms in Whirinaki, Otaki and Leeston and three CW ‘houses of hospitality’ in Opononi, Palmerston North and Christchurch.