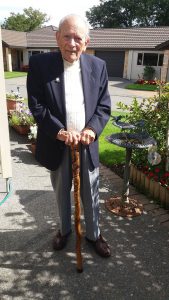 Douglas (Doug) was born in Insein Burma the fourth child of Charles (Charlie) and Agnes (nee Bonner) Blake. He went to Insein Railway school like any other child in the close knit Insein railway community. He then attended Diocesan Girls School being the only school in the area until the age of 13. His parents then sent him up country to Maymyo Government School as a boarder not only for his further education but to socialise him as he was a quiet intense child. Here he did well in sports particularly athletics and earned a reputation as a middle distance runner. When he matriculated from secondary school he went to Rangoon University where he graduated with a major in political science. While at University Doug continued with his athletic training taking the national title for 880yards – a record he was held well after WWII.
Doug’s first job was as a School master in Diocesan Boys where he taught the seventh standard (Year 9). He later joined the Customs service as a preventative officer until war came to Burma. Doug enlisted in the British Army and was sent to join the 9th Burma Rifles then on to the 4th Burma rifles as the column commander. Injury in the battle for the Yenangyaung Oil fields in April 1942 saw him evacuated to Myitkyina and then flown out to 14th General Hospital in Central North India where he met a young catholic nurse, lieutenant Eileen Maneckjee-Wyse who later became his wife of 62 years.
Once released from Hospital Doug was made the Adjutant and Quartermaster of all troops out of Burma under Colonel Layman. The task was to reform the whole regiment. The reorganisation found Doug posted to the 5th Brigade and being sent to the Regimental Centre for training of the battalions which had permission to recruit Gurkhas. This opened the way for the 1st Reinforcement Battalion (Seiks and Punjabis) and the 2nd Reinforcement Battalion (Gurkhas). Doug was then sent to 2nd Battalion as the second in Command tasked to amalgamate the remnant Japanese and British Armies into the new Burma Army.

On completion of this task Doug returned to Burma with the 2nd Battalion to take over the security of Rangoon during the political confusion. This was also a time when British, Indian and African troops were repatriated back to their homelands. He was then sent to India to study German selection of officers. On his return he developed and implemented the officers testing team programme which was very successful in recruiting and training young officers.
As Defensive Commander of Rangoon under Chief of Staff general Ne Win Doug was asked to assist with operations to contain the rebel Karen forces rapidly approaching the capital Rangoon. Doug took over command of operations making him supreme commander of both Northern and southern Commands.
With the successful completion of the Karen Operation Doug was sent North again as the Northern command Headquarters had been overrun by the communist, its commander captured and killed. Doug was again successful in bringing the area back under Rangoon authority. This held until the Kuomintang (KMT) started entering Burma. They were asked to disarm but refused which resulted in conflict. Doug again was sent in to keep them out of Burma. Under his command he was able to keep the KMT contained east of the Salween River for 2 years until the Rangoon war office decided to take over operations against the KMT. This strategy was not successful and the task of containing them fell ball back to Doug.
Doug remained as Brigadier of southern command for 6 years before leaving the army in 1959 to join Burmah Oil Company (BOC) as assistant Works Manager. Later he was promoted to Assistant Manager of the oil fields in Chauk. On nationalisation of the oilfields and the political change brought about by the 1962 military coup Doug resigned and immigrated to New Zealand with his family in February 1964. 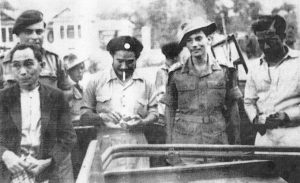 Doug was employed by Shell Oil Company and remained with the company for 18 years until his retirement at age 70. A strong Christian man he was well known to both Anglican and Catholic communities in Glen Eden, Avondale and Titirangi often attending both services. He taught Sunday school and was on the vestry committee of his Church. In 1990 he made the decision came over to the Catholic tradition.
Doug and Eileen came down to Havelock North in the Hawkes Bay in 2006 to be close to family as Eileen was unwell. Sadly Eileen passed away in 2008. Doug continues to live independently. He has become a much loved member of The Catholic Parish of Hasting Our Lady of Lourdes parish community. He continues to attend daily Mass, driving to and from church each day. He still cooks for himself and remains a keen gardener though he finds it difficult to do the bending work that gardening requires. Doug wishes to thank his friends and worship community for all the love, blessings, prayers and kindness they have shown him and Eileen over the years.

WelCom April 2021 David McLoughlin New Zealand’s Catholic bishops will gather in Wellington on Sunday 15 August, 2021 for a Mass to renew Bishop Pompallier’s 1838 dedication of this country…