WelCom July 2017: Steven Thomas Hancy was born in Wairoa on 23 September 1953. After studying at Holy Cross College Mosgiel from 1981 to 1987, he was ordained to the priesthood on 6 February 1988. He is remembered for his gentleness and quiet faith as he loyally served the Palmerston North Diocese and its parishes in Hawera, Taradale, Ohakune, New Plymouth, Patea/Waverley, Hastings West, Holy Trinity, Waipukurau and Central Hawke’s Bay, and Whanganui. Fr Arthur Toothill sm of the Marist Community in Wairoa and parish priest at St Peter’s Wairoa, presided at Pa Steven’s Miha Maori Mass for his tangihanga. Fr Arthur pays tribute. 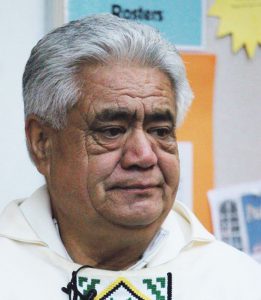 Pa Steven Hancy, priest of the Palmerston North Diocese, died in Whanganui on 27 May 2017. Pa Steven had been recovering from recent illness so his death at the relatively young age of 63 was not expected. The Whānau of Pa Steven took him home to Mohaka, Northern Hawke’s Bay, for his tangihanga (funeral).

Many were uplifted by the Miha Māori (Mass) that was dignified and somehow intimate. Bishop Charles Drennan, Bishop Peter Cullinane – who had ordained Pa Steven on the same Marae ‒ and several Diocesan and Marist priests concelebrated. Deacon Danny Karatea-Goddard placed Ko te Rongo pai a te Ariki (Book of the Gospels) and Ko te Karihe (Chalice) on his casket; these being symbols of Word and Sacrament. Rihari Puanaki and members of Tawhiti a Maru Catholic Marae, Wairoa, wove music, himene, readings and karakia of the Miha Māori in a seamless way

Scripture readings were from the Chrism Mass. Isaiah reminded us of the comfort of God for those who mourn. The Gospel from that Mass was chosen because Pa Steven had read it in Te Reo at the Holy Spirit Cathedral during Holy Week. The readings reminded us the Spirit of the Lord was upon him. The ministry of the priest is to preach, teach and make holy for the people of God

God’s call to Diocesan Priesthood came to Steven within a strong whānau of faith. It came within the setting of being surrounded by generations of Māori who lived and shared the faith they were immersed in. While at the ‘works’ after college he felt led by the Spirit to do something better for God.

Pa Steven was caring, prayerful, dedicated and a source of help. The help he received in his sicknesses and suffering enabled him to care for others. While in hospital others were often taken, or even wheeled, to him for karakia (prayer) and blessing. In the spirit of Micah, Pa Steven did what was right, loved what was good and walked humbly before God

During the two days, many whaikorero (speeches) made mention with sadness of the passing of recent Māori priests and those priests who had ministered with Māori. It occasioned the need for renewed prayer for Vocation to priesthood from within Māori. At the end of a public service, later in the day, a young Hato Paora rangatahi (student) ‘made the way smooth for Pa Steven’ as he was carried from the marae to the waiting hearse. He was accompanied by a passionate haka from fellow students. Pa lies in Potaka Urupa(cemetery), Raupunga – a small settlement in northern Hawke’s Bay.

Farewell, then, Go to the world of light to be with your heavenly Father.