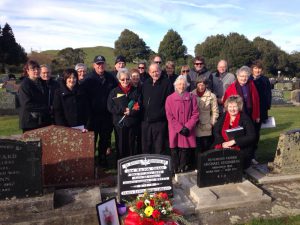 Family of James Lewis George Grant gather at his headstone where his ashes were laid to rest at his father’s plot in Taranaki on July 9. Supplied

WelCom reported in April about an elderly man who died alone in his Wellington apartment, unknown and apparently unwanted. Now James is ‘home’.

As part of a reflection on the Corporal and Spiritual Works of Mercy the Archdiocesan Pastoral Council had discussed this sad situation in March in relation to the two ‘Works’: burying the dead and praying for the deceased.

Fr James Lyons, parish priest for Sacred Heart Cathedral, just two blocks from the man’s apartment, said: We know nothing about this person, whether or not he was religious; we don’t even know his name. If he has no family, no friends, perhaps we could look after him and give him a dignified burial.

The suggestion became a reality. In a letter to parishioners Fr James said, nothing was known of this man – now identified as James (Jim) Grant – except that he was born into a family, lived and died among us. ‘He was identical to us in his humanity and, as Christians, we know he was a living image of God. It seems most fitting we offer him a memorial within the context of our own faith, giving thanks for the gift of life. May our love commend James Lewis Grant to the all-embracing love of God. May he rest in peace.’

Jim Grant was prayed for and farewelled at a Requiem Mass in the Cathedral on Sunday 13 March. Six parishioners were invited to be pallbearers and hundreds turned out to the Mass.

Jim’s story was reported in other newspapers. It was through the media that a cousin in the Waikato recognised Jim’s name as the boy she went to school with at St Joseph’s Convent School in Stratford and spent holidays with on the mutual family farm at Pukengahu east of Stratford.

As soon as family members in Stratford realised there was a connection they contacted funeral director Simon Manning. They wanted to be part of reuniting Jim with his father, mother and the other members of their family.

Sandra Collins – whose late-father Peter O’Neill (who attended St Patrick’s College Silverstream) –was one of Jim Grant’s cousins. She made a booklet for the service and contacted distant family members.

Sandra said, ‘It was easy to rally the rellies, some of us not knowing the others, and join together with the support of Monsignor David Bell of the Stratford parish to farewell Jimmy’.

‘Although he lived most of his life in Wellington, Jim is now at home with his parents and surrounded by family’, said Sandra.

Family member, Mrs Gareth Carlin of Whakatane, wrote to Fr James. ‘Our family would like to say how much we appreciate your, and your congregation’s compassion for a person who was unknown to you and to give him a funeral that was indeed fitting. He was a Catholic. Unwittingly, Jimmy was the catalyst for family members getting together. Please carry on this ‘Work of Mercy’ and reassure your parishioners that families appreciate your compassion.’