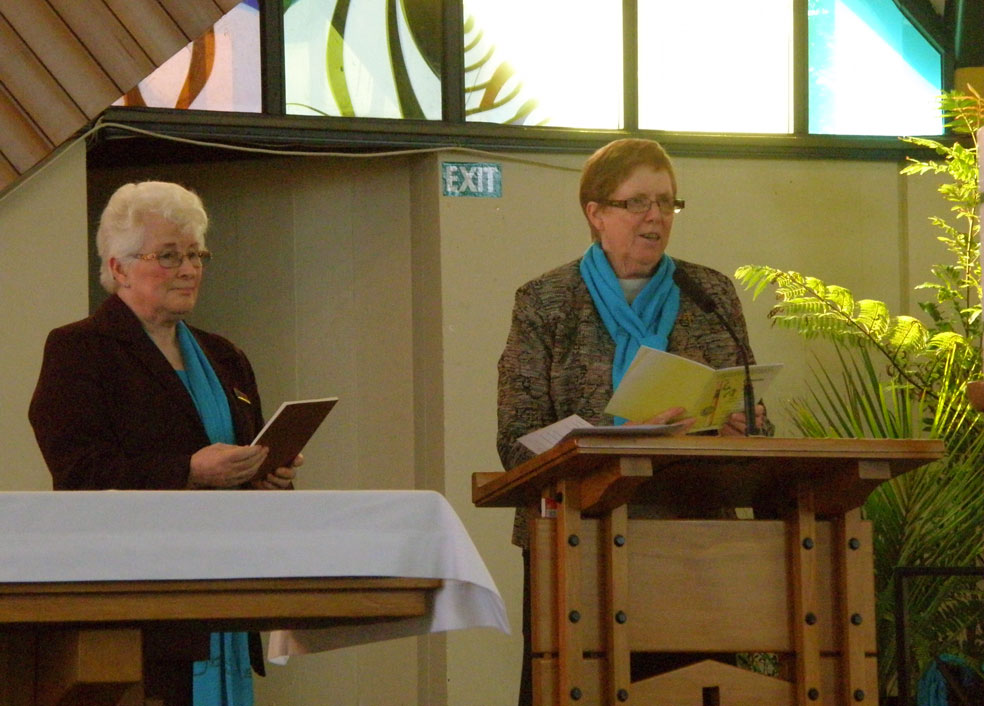 The ritualisation of the re-unity of the Sisters of St Joseph of Nazareth, Whanganui, with the Sisters of St Joseph of the Sacred Heart took place on Saturday 24 August after 137 years of separation. It was a day filled with rich symbolism, moving ritual, joy and much laughter – a day of celebrating a new phase of dancing with God’s imagination because, as Bishop Charles Drennan said in his homily, ‘The imagination leads us not to fantasy but to the reality of the present and draws us forth in the great joy of God’s desire, God’s vision, God’s dream for us all’.

Two young people in mid-19th century Australia responded to God’s dream. They imagined that there were different ways of bringing the Word of God to people in this particular place with its unique challenges. This passion for the mission of God resulted in Father Julian Tenison Woods and St Mary of the Cross MacKillop founding the Sisters of St Joseph in 1866.

Their imagination caught that of a number of women who joined them in this new congregation. Within 20 years, diversification of governance styles occurred. New congregations of Josephite sisters were established in dioceses across New Zealand and Australia, while the original congregation continued to grow and spread. The passion and imagination to meet the needs of children and families in diverse settings on both sides of the Tasman were the common tune to which sisters across all the Josephite congregations responded.

As part of this diversification four young sisters from the Perthville congregation left Australia in 1880 to establish a new community in Whanganui. This Josephite congregation would become colloquially known as the ‘black Jos’ while the community that arrived three years later in Temuka were part of the ‘brown Jos’ group. Eventually there were five diocesan groups across Australia and New Zealand. They began corresponding through their leaders from the 1920s and this led to the formation of the Josephite Federation in 1967 of which the Whanganui Josephites have been part for more than 45 years.

Throughout the years the various branches of this Australia and New Zealand Josephite community have come to know each other, sharing stories and dreams, working together in diverse ministries and for various causes and praying with one another. The teal pashminas of the canonisation in October 2010 symbolised this unity of spirit and purpose.

After much discernment, prayer and conversation three of the Federation communities have sought fusion with the Sisters of St Joseph of the Sacred Heart. In their letter, the Whanganui Sisters explained that they were requesting this unity because:

Mary MacKillop and Julian Tenison Woods desired that all Sisters of St Joseph be one as they were in the beginning;

Bishop Charles told them his reading of their history while reflecting on the readings for the day prompted a realisation of the steps of the dance, ‘passing through the sacred unfolding of time: not so much events or milestones, as one might expect in a history, but intuitions and insights, traces of the imagination at work, practical evidence of God’s spirit at play, at work. To put it another way, what drew my imagination into your dance were the verbs of this history rather than the nouns: devote, support, teach, travel, journey, settle, close, open, grow, explore, respond afresh, emerge, strive, venture, partner, assist, offer, share and notice.’

Bishop Charles suggested an antidote to the superficiality of today’s world might be the ‘ever moving yet soothing, mighty river which has daily enveloped The Whanganui Sisters of St Joseph of Nazareth and many others gathered here this morning’.

‘Ko au te awa. Ko te awa ko au. I am the river. The river is me. There is no literal translation of Te Awa Tupua in English, but for Māori and the people of this place it embraces the spiritual aspects of the river and the intrinsic interrelationship of people with it – something of the river yet transcending it, drawing those living alongside it into the realm of the spiritual from the mountain to the limitless sea. May its life-giving braids accompany you all.’

And so on a sunny August day the dancers rejoined one another. Having allowed the imagination of God to inform their dreams, Whanganui Josephites took on a new emblem indicating belonging in a new way and renewed their vows with other Josephites from throughout Australia, New Zealand, Ireland and Peru.