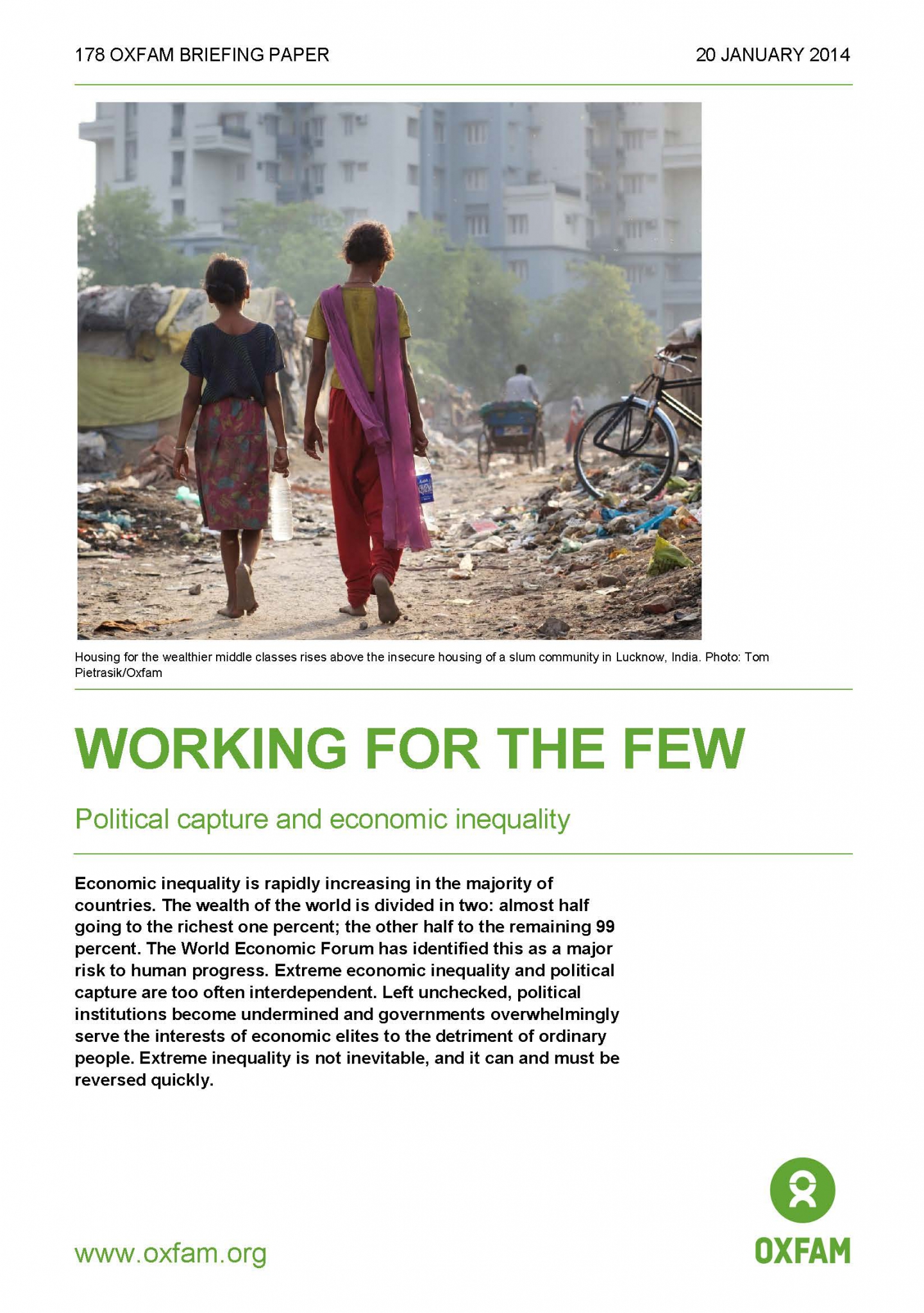 The gospels make it abundantly clear that Jesus repeatedly had harsh things to say about those who acquired great wealth, especially at the expense of the least well off. Ignorance, the wealthy turning a blind eye to the disparate plight of the poor was not an acceptable excuse for Jesus either.

At best, careful prudent responsible stewardship of one’s gifted wealth was paramount for Jesus. Accumulated wealth was a real stumbling block for those seeking to join him in bringing in the Kingdom of God. In short they were better off without it.

And this same locked-in, structural inequality strikes at the very core of the social wellbeing of societies today. It rips out their economic heart by continuing a massive concentration of resources in the hands of fewer people presenting a major threat to inclusive, just political and economic systems.

A recent Oxfam report [Working for the Few: Political capture and economic inequality 2014] reinforces this damaging development, noting that a mere 85 people control the same amount of wealth as half the world’s population, ‘That is 85 people compared with 3.5 billion’.

Worse, it appears to be totally beyond the capacity of the world’s richest nations ‘to try to stem the tide of rising inequality. It says that seven out of 10 people live in countries where economic inequality has increased in 30 years’ [The Christchurch Press 21 March 2014]. New Zealand is one of these countries where wealthy elites have co-opted political power to rig the values of the economic game, undermining democracy and entrenching growing inequality.

‘From the mid-1980s to the mid-2000s, the gap between rich and the rest has widened faster in New Zealand than in any other developed country.

‘The average household in the top 10 percent of New Zealand has nine times the income of one in the bottom 10 percent.

‘The top 1 percent of adults own 16 percent of the country’s total wealth, while the bottom half put together have just over 5 percent.’

The most damning aspects of our national social, economic and political crisis are that New Zealand children are more likely to be poor, feel unsafe and unwell, than children in most other developed countries. Added to this is the ‘shocking statistic for New Zealand … the disproportionate number of Māori and Pacific people living below the poverty line’ [Rashbrooke, M (ed) Inequality: A New Zealand Crisis 2014]. Sadly New Zealand will remain gridlocked into this growing grave extraordinary economic disparity simply because it is not in the interests of the elite powerful few to address the unjust economic inequality that perpetuates their many privileged advantages.

In fact, they continue to exacerbate it, for example, by seeking to further liberalise labour laws to the detriment of waged workers, and engaging in another round of ‘benefit bashing’ by making it possible to prosecute partners of defrauding beneficiaries.

At a macro level this hyper-inequality is impounded by the irreversible trend in modern capitalism to create job-less growth by investing in capital for super efficient technology to make waged workers redundant, further concentrating accrued wealth into fewer hands – all underpinned by rules rigged through financial deregulation, unregulated monopolies, tax evasion and excessive chief executive salaries. Hence recent calls for international cooperation to ensure companies such as Google, Apple and Starbucks start paying their share of taxes.

Despite the entrenched nature of this gross inequality, we don’t have to accept that this is simply the way the system should work. A Christian response requires action at a number of levels, beginning with ourselves and examining our own particular life styles, priorities and commitments; then lobbying our national church leaders to follow the lead of Pope Francis in spelling out and actively seeking to address inequality in its many forms.

By supporting the Oxfam Report’s challenge to those gathered at Davos for the World Economic Forum, who have the power to overturn the rapid increase in inequality, ‘Oxfam is calling them to pledge that they will:

Two thousand years later the context is different but the inequality the same and it stretches social tensions and threatens social breakdown. May we, who profess to be part of a Christian church, follow Jesus’ uncompromising response to the challenge of inequality, which costs everyone, especially those on the lowest incomes.