To celebrate Te Reo Māori Language Week 11–17 September 2017, WelCom features some of the Catholic Māori communities within our two dioceses.

The first Catholic priests in Aotearoa New Zealand came to evangelise Māori. This was the mission of Bishop Pompallier and the Marist priests and brothers that came with him in 1838 and the following years. Initially the work among the European settler community was secondary.

As the number of settlers grew rapidly from 1840, eventually clergy were drawn away to pastoral care of the European Catholic community. Pastoral care for Māori began to take second place as they became a minority group and following the Land Wars of the 1860s were looked upon with suspicion.

Land confiscations and sales meant that European farms and towns came to occupy places where Māori had lived, hunted and fished. Pākehā and Māori became more separated in the areas in which they lived. Pastoral work among Māori required priests and religious who could speak Māori, understand their ways of living and thinking and be prepared to be ‘marginal’ among a marginalised people. 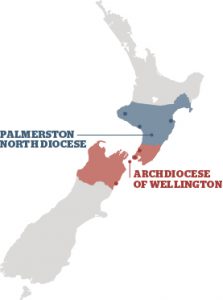 In 1850 Catholic New Zealand split into two dioceses – Auckland and Wellington. The latter covered everything south of Tūrangi to Stewart Island. In the Wellington area Marist priests and the Sisters of Compassion carried on the pastoral work including the present Palmerston North diocese. The priests were mostly French, even when reinforcements began to arrive from Ireland.

The methodology of the ‘Māori Mission’ was for the priests and sisters to visit Māori in their homes and marae. Masses and other sacraments would frequently be celebrated in these places and occasionally in churches. There were some places where the presence of the Church was stronger among Māori. It is largely in these areas that Mass in Māori has continued to be celebrated monthly.

When Māori began to move to the cities in large numbers following WWII, the urban Mass centres grew – Te Kainga in Wellington and Te Ngākau Tapu parish, Porirua. In some places for lack of clergy and diminishing attendance some regular centres of Mass in Māori have ceased.

Monsignor Pā Gerard Burns is Vicar for Māori and Vicar General for the Archdiocese of Wellington. 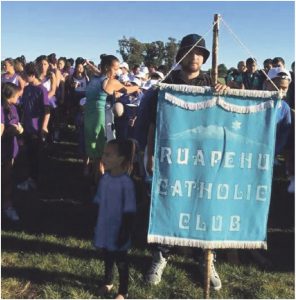 In the Palmerston North diocese, Māori Eucharistic communities include Kaiwhaiki, Hiruhārama and Rānana on the Whanganui River, Maungārongo marae in Ohakune and St Joseph at Taiuru marae. The two Māori secondary boarding schools, Hāto Pāora College and St Joseph’s Māori Girls’ College, are also in the diocese. Hāto Pētera-Hāto Paora at Kauwhata marae and Kakāriki Hāto Hōhepa at Te Hiiri marae are both in Fielding. Paki Paki in Hastings has weekly Miha at The Immaculate Conception Church and a local Trust is restoring the historic church. Māhia, St Mary’s in Taradale and St Thomas More are in the Napier Pastoral area. Ngā Pekanga Catholic Māori Society is based in Waitara. 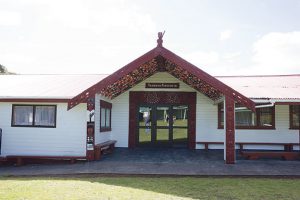 Kaiwhaiki was the first Catholic mission on the Whanganui River in 1852 and today, Sr Makareta Tawaroa rsj is kaitiaki. At Maungārongo, Marists still serve the Māori community and since 1981, monthly Mass has been said in the chapel, Te Kingi o te Maungārongo. 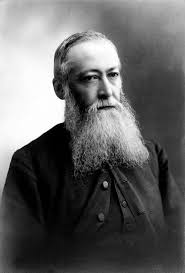 In 1879, Fr Christophe Soulas sm arrived in New Zealand from France. From 1903 to 1920, he devoted himself entirely to spreading the faith among Taranaki Māori and was based at Okato. He was called ‘Hoani Pāpita’ by Māori. Fr Soulas and the Venerable Suzanne Aubert were friends of Rure (Te Manihera Keremeneta, 1864–1959).

In 1949, a full ceremonial pōwhiri was given for Archbishop McKeefry at Ngārongo marae (also known as Ketemarae marae) by the principal hapū of the area, Araukuku of Ngāti Ruanui. Today, Araukuku Catholic Māori Club continues to take part in the annual Hui Aranga (Easter Gathering).

In 1964, the Archbishop opened and blessed Hoani Pāpita, the new Mission Hall, which had been built with volunteer labour. Today, Mass is celebrated on the first Sunday of the month. Catechism classes for tamariki, baptisms, confirmations and marriages take place and the community participates in parish Masses at St Joseph’s, Hawera and Sacred Heart, Manaia.

Three Papal Award recipients from Hoani Pāpita are Polly Edwards (deceased), Ray Edwards and Henare Ngaia. Mahuru Robinson is a representative on the school board and I am on the parish committee. Hoani Pāpita has its own Catholic Māori Council, which deals with all the business pertaining to our beloved Hoani Pāpita. 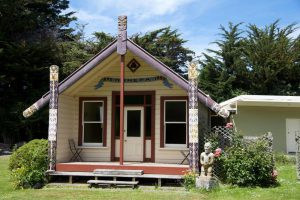 At Mangamāunu Marae in Kaikōura, the house Hōhepa still stands. It reminds Catholic Māori of the katekita (catechist), Hōhepa, who brought the faith to Kaikōura.

Neighbouring Takahanga Marae is the standing place for Ngāti Kuri. The original marae was built some 450 years ago by Kāti Mamoe. The current marae was built in the mid-1980s and the meeting house officially opened in January 1992. It was built in honour of the tūpuna Maru Kaitatea, son of the Chief Purahonui who led Ngāti Kuri south in a migration from the Wairarapa. Kaikōura’s full name is Te Ahi kai koura a Tama ki te Rangi – the place where Tama ki te Rangi cooked crayfish. Today the marae is the place where Ngāti Kuri gather to kōrero and dialogue.

Many of the marae whānau are Catholic and continue in their mission to serve local community and visiting groups. We all remember how the Kaikōura marae stepped up to feed thousands affected by the 7.8-magnitude earthquake last year. Takahanga Marae was well positioned to serve the community and for the last 30 years have provided community, social service and health services through Te Tai o Marokura. 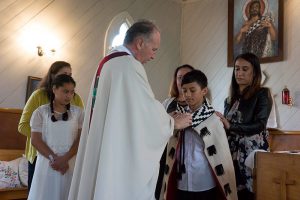 Tamariki clothed with the korowai. 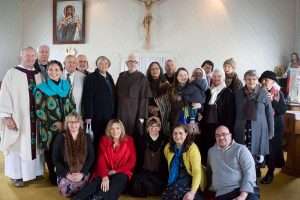 The parish operates within tikanga Māori and is open to all. Pā Gerard Burns is the parish priest. 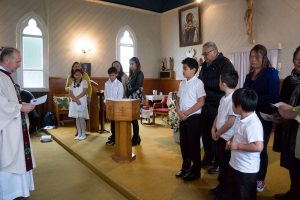 Miha began with the pūtātara, karanga and a mihi whakatau.

During the Baptismal rite, the tamariki were symbolically clothed in a korowai to signify their new life in Christ. The Baptism preparation programme included whakapapa, karakia and hīmene.

Also at the Miha, one of the parishioners, Frances Wilson made her final profession as a lay Carmelite. Fr Paul Gurr from Sydney, Australia, officiated. Two lay Carmelites, Christine Wade and Vera Cleary accompanied Fr Paul. Lay Carmelites from Palmerston North supported Frances as did her sister, Caii-Michelle Baker, who sang Flos Carmeli in Latin.

Miha is celebrated on Sunday at Te Ngākau Tapu at 10am – nau mai, haere mai. 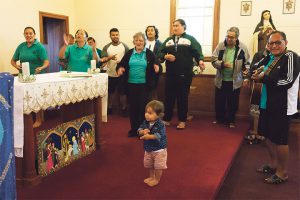 Richard Puanaki (far right) and whānau during their annual Hikoi to the Carmelite Sisters in Auckland, January 2017.

The three-fold community of faith in Te Wairoa of St Peter’s Parish, St Joseph’s School and Tawhiti a Maru Marae is one of the earliest Catholic communities in Aotearoa New Zealand. The Catholic Māori community are active in their faith commitment and participation.

The Catholic Māori community at Tawhiti a Maru Marae is made up of St Theresa’s Church, the church hall and the wharepuni (guest house). Miha Māori is celebrated on the first and third Sunday of each month. On the fifth Sunday of a month, Miha is celebrated in St Peter’s Catholic Church in town across the river.

In Wairoa, two initiatives will enhance Māori Language Week in 2017. The Wairoa Town Council has made an official commitment to make the town bilingual by 2040. Wairoa is the first town or city in New Zealand to make such a commitment for te reo Māori. Iwi and hapu are engaging with government to enhance their cultural and economic future. Together, these two initiatives will give direction to the town and for future planning. 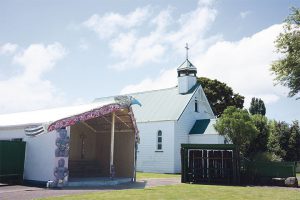 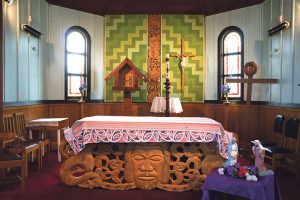 The following publications are available on request.

He Puna Iti i te Ao Mārama – A Little Spring into the World of Light
This book, by the late Pā Henare Tate, is about Māori theology based on Māori culture and history. Contact: Libro International, 78 West Coast Rd, Oratia, Auckland 0604. www.librointernational.com

Kaupapa Māori – Māori Dimension
This resource, prepared by Danny Karatea-Goddard for the National Liturgy Office, provides key markers for the use of Māori text, images, music and perspectives, to help with the Māori dimension in liturgy for the Catholic Church in Aotearoa-New Zealand. Contact: Louise Campbell, National Liturgy Office, email lcampbell@nzcbc.org.nz

He Rārangi Papa Kupu Katorika – A Catholic Word List
A glossary of Māori-English and English-Māori word lists and phrases specific to their use in the Catholic Church Aotearoa-New Zealand, prepared by Danny Karatea-Goddard. Available online at: pndiocese.org.nz/maori/glossary 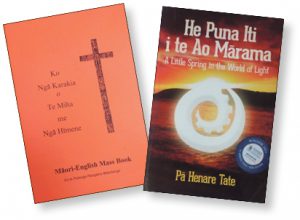