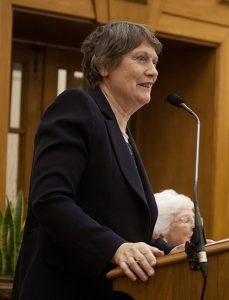 Former Prime Minister Helen Clark says New Zealand can provide a model of religious diversity for the rest of the world.

Miss Clark, who heads the United Nations Development Programme, said this at the opening of the new Religious Diversity Centre in Wellington on Wednesday 30 March, while home briefly in New Zealand.

Miss Clark is patron of the centre. She said our world badly needs such models as New Zealand. ‘On so many days now when I see the news headlines I often think how fortunate we are.

‘For ongoing peace and harmony, it is vital to embrace diversity, and respect every culture and faith which is part of it. Both strength and unity can be found in diversity. The alternative is bleak: it would be a future based on intolerance and rejection. New Zealand has an opportunity to make a New Zealand way – based on tolerance and respect for each other – a model for the rest of the world to follow, and it is important to keep on working on that.’

She referred to societies ripped apart by violent extremists with the extremists claiming so often to act in the name of the faith and yet prepared to violate every single principle of those faiths. ‘Our world badly needs voices of reason and tolerance, and those who will work to build dialogue and respect across faiths. New Zealand can show the way.’

Miss Clark said the role of faith-based actors had special significance in those parts of the world where governance structures were weak and the state could not give access to basic services like education, justice, health and security.

She said the UNDP acknowledges the role of the faith actors in local communities. Faith organisations often deliver critical services. Faith leaders can mobilise grassroots support and earn the trust of vulnerable communities.

‘They also have the ability to influence cultural norms and social cohesion.’

The Religious Diversity Centre will be a national centre of education and research on religious diversity, spiritual and secular communities in New Zealand. It will provide advice to policy makers and the media, and offer training for companies, media and others.

Sr Catherine Jones smsm, Chair of New Zealand Catholic Bishops Committee for Interfaith Relations said, ‘I see a valuable contribution we could make in the area of continuing dialogue, education, professional development, and training sessions. The Bishops Committee for Interfaith Relations fully supports the goals and work of the Religious Diversity Trust.’

As Prime Minister, Helen Clark supported New Zealand’s National Statement on Religious Diversity first published in 2007 and was instrumental in New Zealand becoming one of the four sponsoring nations of the Regional Interfaith Dialogue that involved 15 Asia-Pacific countries.

Cardinal John Dew was among those who contributed significantly to the development of the National Statement on Religious Diversity. On its release at Waitangi during the Asia-Pacific Dialogue, the Catholic and Anglican bishops applauded the declaration. They said, ‘From our own faith position we cherish freedom of thought and freedom of religious expression, both for ourselves and for others. This is inherent in our understanding of the Christian Gospel as a gift that is freely given, to be freely experienced and freely received in a climate of freedom itself.’

The bishops also affirmed the right to celebrate and share faith in this country’s democracy. They pointed out that Governor Hobson committed the Crown to enduring respect for the freedoms of different faiths at the signing of the Treaty of Waitangi in 1840. In response to a question from Catholic Bishop Pompellier, Governor Hobson said he would protect and recognise not only the major western religions, but also Maori customary beliefs and practices.

Today, New Zealand is recognised to be one of the most religiously diverse countries in the world, at 19th out of 232 countries.