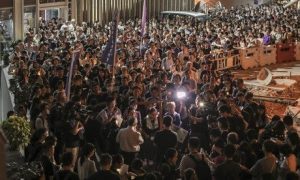 Catholics march for peace in Hong Kong as unrest continues.

The large protests in Hong Kong that started in response to a proposed extradition bill, which has now been suspended, have evolved into a more demanding pro-democracy movement.

Meanwhile, over 1,000 Catholics marched for peace in the city on Thursday evening, 1 August. People at the vigil gathered in front of the Cathedral of the Immaculate Conception and marched through the central business district to the Court of Final Appeal of Hong Kong, singing hymns and holding electric candles.

Organisers of the march who include the Justice and Peace Commission of Hong Kong Diocese, said they were calling for a full withdrawal of the extradition amendment proposed by chief executive Carrie Lam; the establishment of an independent committee to investigate the conflict between protesters and police; and accountability by the Hong Kong Legislative Council and chief executive but said that they would remain solely a prayer movement.

Hong Kong Auxiliary Bishop Joseph Ha Chi-shing addressed the gathering, saying the situation called for the Catholic Church to speak with peace and reason. ‘In the past two months, we have really experienced the limit of humanity and we should pray,’ he said.

‘Violence will only create more violence. Hatred will only produce more hatred. Injustice will never achieve justice. History will prove that only peace and reason can establish a long-term peace,’ he told the protestors.

The bishop pointed out the root cause of the demonstrations lay with the Hong Kong government, which, he said, had no excuse for its actions.

Meanwhile, keeping the peace was something of a ‘mission impossible’ for police, he said, because the current problems were rooted in politics, not security.

The church has been among the bill’s opponents for months.