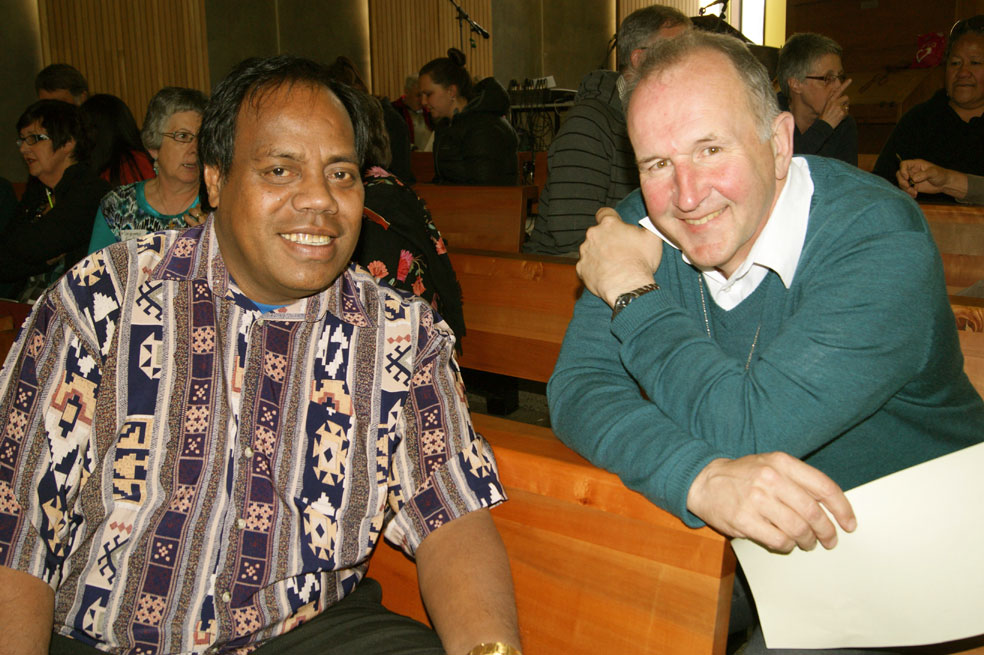 But who is the stranger?

The Māori concept of hospitality expressed as manaakitanga means to build up the mana of the other person and in so doing, your own mana is increased. This idea captures the essence of hospitality to the stranger, Mgr Gerard Burns told the Stewardship workshop on 2 November.

People who greet others at the church door seem proud to do so because it boosts their mana – their dignity and self-worth.

Hospitality to the stranger was about welcoming the Other. It was an important topic central to our living of the faith. ‘The word “Other” has been taken to mean someone who is different from you in some way. Also, God is seen as “Other”.’

‘Welcoming the stranger has a dimension of welcoming God. We are given that in a special way – in that great text from Matthew 25 about what the nations will be judged on, “I was a stranger and you welcomed me”.’

We need to work out who the stranger is and what the term ‘stranger’ might mean. Perhaps it applies to someone who could act differently from us, but we then need to ask to whom the ‘us’ applies. Who are we and who are we uncomfortable with? Who do we avoid? That is the stranger.
There are many subtle ways in which we can block people out.

‘How many of us have heard, “All these new people have arrived in our parish and they want to sing different hymns. We don’t do that here.” Who’s the “we”? We have to balance a healthy sense of identity with having an open circle to bring people in – an openness to God [In introducing the workshop, Archbishop John talked about the closed and open circle].’
It is important to have a sense of who we are as parish, but it can become a closed sense of who we are, Mgr Gerard said.

In reflecting on how someone is different, we are being invited to recognise the stranger within ourselves. ‘Sometimes we are putting out there parts of ourselves that we don’t want to go near either. Because we are afraid of going there in ourselves, we project those fears onto others – “those (fearful) people over there”. Talking about people different from us as “those people” makes the chasm between us wider.’

Alluding to the parts of us that we don’t like to look at, acknowledge or that we are afraid of, Mgr Gerard said that to be fully rounded human beings, we need to get both sides of ourselves talking to each other. ‘The growth of the shadow side of us makes us become whole and the integration of that helps the people in our community whom we are rejecting become whole.’

This recognition of our ‘shadow side’ can also be applied to the nation’s adoption of the Treaty of Waitangi as an agreement between two peoples. Twenty years after the treaty was signed, it was declared a ‘nullity’ and was ignored until the 1970s. The process of the past 30 years of recognition from the non-Māori side has gone some way to creating a wholeness in our nation. ‘If we are going to be a whole nation, we need to recognise and welcome the treaty as part of our nation. This could be an example of the importance of what we see as the other side.’

The stranger is not always the person who comes from outside. ‘It might be someone among us or within us. To be truly welcoming, we must know ourselves and our story – what is your history as a parish, a person? When have you felt like a stranger?