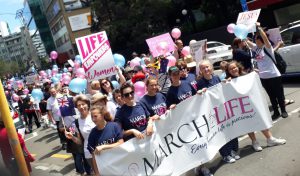 WelCom February 2018: Six hundred people from around the country joined a ‘March for Life’ in Wellington on 9 December 2017. They gathered at Civic Centre to make their way to Parliament. The march remembered the more than 500,000 babies who have been aborted since the enactment of the 1977 Contraception, Sterilisation and Abortion Act.

The march also commemorated 40 years since the Act was passed.

The theme of the march was ‘We love them both’.

Michelle Kaufman, spokesperson for March for Life, said organisers wanted to let everyone know there is significant community support available for women facing an unexpected pregnancy.

‘Too often, women feel they have no other choice but to have an abortion,’ she said. ‘That isn’t choice. The right kind of support for each woman’s particular situation empowers her to choose life for her baby.’

Speakers on Parliament’s steps included Gordon Copeland, former MP; David Light, silver Commonwealth Games boxing medallist; and Kate Cormack, Vice President of Voice for Life. They said that any changes to current legislation should be based on compassion and love for the women in crisis.

Organisers hope this march will become an annual event.