The sort of victory and domination that gave rise to the United States-led invasion of Iraq four years ago is ‘totally against Jesus’ message’, says an American Jesuit priest and peace activist.

Jesus was a non-violent revolutionary – ‘a one-person crime wave’ – and we, as Christians, are called to emulate this epitome of non-violent resistance. 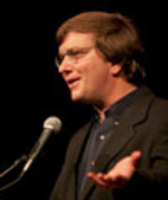 Fr John Dear has been travelling through Australia with his impassioned message modelled on Mahatma Gandhi and Martin Luther King, speaking out against the ‘35 wars’ throughout the world, in all of which America is involved.

His protesting has led him many times to the Pentagon with friends to carry out such creatively nonviolent actions as sitting on the floor in the foyer outside the lifts and reading aloud the names of those who have been killed in the Iraq war.

‘I don’t know if you’ve ever done anything like this but we stayed for seven hours and within the first 10 minutes of reading the names out, we were all weeping.’

Last month [14 March] John Dear told a group in Melbourne that the only thing that could be said about Jesus with conviction was that he practised ‘active, public, creative nonviolence’.

‘The most significant, revolutionary words he ever said are the climax of the Sermon on the Mount: ‘Love your enemies’ [Mt 5:3-12]. If this is the message of Jesus, we have to reject the false spirituality of violence and war and follow the nonviolence of Jesus.

John Dear has written and edited 25 books on peace and nonviolence. His actions against violence have led him to challenge the legality of the war in Iraq and the American government’s stockpiling of nuclear weapons.

For such actions the 47-year-old has been arrested ‘more than 75 times’ and has spent eight months in a tiny jail cell with fellow activist, Phillip Berrigan, for hammering on an F15 nuclear fighter bomber in an effort to ‘beat swords in plowshares’, according to the biblical vision of the prophet Isaiah [Isa 2:4].

But he says he is a follower of Jesus and challenging the killing of 50 million people a day through the ‘structured, systemic, institutionalisation of violence’ is part of the job description.

‘If we are serious about being Christian, we must denounce the global system that comes with the litany of violence – executions, sexism, racism, violence against children, violence against women, guns, abortion, the destruction of environment, from the ozone layer to the rain forests to our oceans and the war on Iraq.’

John Dear has little time for a church which buys into the just war theory where might makes right, war brings peace and nuclear weapons are the only security.

‘In this false spirituality, we … seek not forgiveness and reconciliation but victory and domination, and the good news is not the love of enemies but the elimination of enemies. It’s heresy, blasphemy and idolatry. The empire always tries to instruct the church on sin and morality, telling us that certain personal behaviour is sinful or immoral, while saying nothing about the murder of 100,000 Iraqis, as if that were not sinful or immoral.’

But, he says, to confess Jesus is to make peace in a violent world.

Fr John Dear has two masters degrees in theology from the Graduate Theological Union in California.