Former Jesuit Refugee Services International Director Fr Mark Raper has argued that the developed world has a responsibility to vulnerable people who cannot live decently in their homelands because of climate change, natural disaster or war. 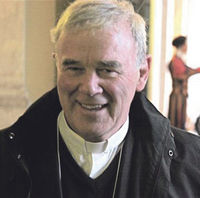 Currently the President of the Jesuit Conference of East Asia and Oceania, Fr Raper presented a paper at the ‘Right to Move Symposium’ at Sophia University in Japan in December looking at the involuntary displacement of people in the Pacific.

He argued that, while recent discussions at Copenhagen showed that nations had begun to wrestle with what to do about communities that are displaced by changes in climate, the associated questions must also be asked about refugees, internally displaced people, those fleeing natural disasters, stateless persons and migrant workers.

‘Refugees, migrants and humanitarian survivors travel together. All are vulnerable, all need protection. Yet some might merit treatment under a particular international law treaty, but for others there is no international agreement that protects their rights, guides burden-sharing or delineates states’ obligations,’ said Fr Raper.

For many years, Fr Raper was director of Jesuit Refugee Service in the Asia Pacific. He said refugees in the region fall into many different categories. The existing conventions, developed for very different situations, don’t adequately meet the needs of all of these new situations.
‘The frequency, size and shared vulnerability of these mixed flows urge a realistic review.’

Important in the review is to identify those most in need of help, to shape public opinion so that it focuses on the dignity of those affected rather than on control of national borders, to work cooperatively to meet needs and share burdens and to offer legal protection to the most vulnerable.

Fr Raper said the moral basis for protecting the vulnerable lies in the dignity of each human being and in our solidarity with one another. We are responsible to each other, particularly to the most vulnerable.
This commitment to the most needy also limits the autonomy of nation states. Their interest is focused on, but cannot be confined to, their own citizens.
‘Alongside the increasingly free movement of goods and capital, a global ethic of solidarity is needed which governs the rights of movement of people for the sake of the global common good,’ he said.

This excerpt is from a paper published inEureka Street on January 20, 201 0 – http:// www.eurekastreet.com.au/article.aspx?aeid=18875

Other writing on this subject: