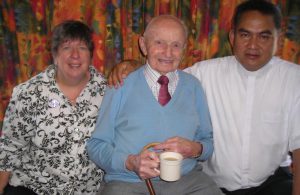 The Catholic Parish of Hastings recently honoured one of its best-loved identities on the occasion of his 100th birthday, with a morning tea after 10am Sunday Mass.

Jim was born in Hastings, February 1916, the youngest of three siblings. His father died when Jim was only a year old. He started school at St Joseph’s Convent until the expected sixpence a week became a financial hardship for the family. Permanent jobs were hard to find then but the pound a week ($2 today’s equivalent) he got from selling papers on the streets helped the family.

On the day of the Hawkes Bay earthquake, 3 February 1931, Jim and his brother were playing ‘bobs’ on the kitchen table – a game with a cue and wooden balls. There was no warning, just a sudden jolt, followed by a minute of minor, wavelike tremors. The brick chimney collapsed onto the path surrounding the house – luckily the only damage sustained. The family of four spent many nights in a tent, and enduring the aftershocks.

A Hastings lawyer and ex-army officer called a public meeting in the Drill Hall at 1pm on the day of the earthquake. A food supply was quickly set up in Kings Theatre and it didn’t take long for the Hastings residents to adjust themselves to living under earthquake conditions, by and large in tents.

Jim’s two brothers volunteered early in the Second World War, and Jim joined up when it was realised the Japanese could become a threat. He arrived in Egypt then proceeded to Monte Casino [south-east of Rome] just after the conclusion of the big campaign. ‘Thank God’ said Jim. The final drive was Trieste but just short of the town, word got through the war was over. Jim was a gun loader and radio operator in the New Zealand tank corps. A sign-writer by profession, when he wasn’t at the front line, Jim’s talent was made use of by painting fern leaves on the Kiwi tanks. While overseas he met Father Spring, another well-known Hastings identity.

Returning to New Zealand Jim met and later married Margaret, and raised three children. It was a body blow for Jim some years later when the love of his life was diagnosed with Multiple Sclerosis and was hospitalised for five years where she eventually died, Jim sitting with her.

Jim has always been a true man of faith. He tells me he has called on God’s help many times and never been denied. He was a regular member of the counting team until the administration of the parish moved to central Hastings. He’s been a member of the Knights of the Southern Cross, and is still very much involved with the Society of St Vincent de Paul and the Passionist Family Group movement and is real inspiration to us all. It appears even the Queen has heard about Jim – she sent him a lovely photo of herself and a congratulatory card with her very best wishes.