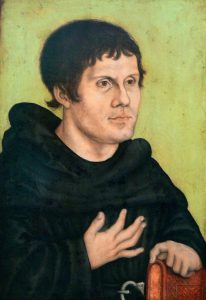 While the publication of Luther’s 95 Theses is recognised as beginning the Reformation, there were earlier rumblings of discontent with Church authority and practice in other parts of Europe. Luther struck the match and what had been unnoticed, ignored or allowed to lie fallow, came to light and suddenly exploded, and there was probably little anyone could do to change what was about to happen.

For someone who did not want to start a revolution, Luther found his concerns, expressed in his writing and preaching, were kindling wood, quickly set alight by his followers and others with even more radical views and demands. Willing or not, Martin Luther was suddenly the name and the face of opposition to Rome, and Rome eagerly joined the battle. Once the rhetoric began, like the fire it quickly spread and morphed into attacks and accusations on all sides that showed little respect for reality.

The newly-established printing press made the spread of ideas faster and more certain, and Luther, a prolific writer, made great and effective use of this form of communications. As a pamphleteer he was second to none.

The Catholic Encyclopaedia, in an article by James Swan, describes the 450 years from the date of the publication of Luther’s 95 Theses, as an ‘unrelenting time of vicious invective and vile abuse’. Not till the mid-20th century did the atmosphere shift from what Swan calls “destructive criticism to respectful encounter”.

A primary exponent of anti-Luther rhetoric was Johannes Cochlaeus (1479-1552). He labelled Luther a “child of the devil”, a “demon-possessed quarreller”, a man of evil intentions, selfish and jealous. An assessment of Cochlaeus’ many publications was that they were written “in haste and bad temper”, but they were taken as fact and did enormous damage. Swan points out that Cochlaeus quoted Luther only to attack him and his criticism dominated Catholic thinking for over 200 years, providing “a distorted, systematic guideline of what Catholics should think about Luther.”

My own religious upbringing was coloured by this thinking. My home town is Dannevirke, one of several small rural communities in Hawkes Bay. In the 1940s‒50s ‘ecumenism’ was not a word we knew. Typical of the time, Catholics kept mostly to themselves. While we lived and worked alongside others, we tended to socialise together with our own tennis and rugby clubs, scouts and guides, and dances and, of course, our own schools.

And we certainly never went into anyone else’s church. The Lutheran Church was literally around the corner from our house. In fact, it backed on to a property just two from us. My mother had made it clear we should avoid the church and never go into it, so my cousin and I thought we could sneak a view if we went the back way. We 10-year-olds didn’t realise the neighbour on the other side of the church was Lutheran (probably the caretaker) and he caught us getting through the fence. Mother wasn’t pleased! We consoled ourselves with the fact that our church was a bigger building than theirs, so why would we want to go in!!

It was very much a ‘them-and-us’ attitude. Catholics were expected to get permission from their parish priest to attend a funeral or a wedding in another church. And it was very difficult to get approval to be a bridesmaid or groomsman at a friend’s wedding. Cracks were widening in this ‘ghetto mentality’ that upheld a separatist approach, as social mores changed in the post-war decade. By the 1950s there was more questioning than blind obedience. There were many Catholics who ignored the ruling about attending funerals or weddings in churches not our own, and followed an opinion attributed to the Jesuits, that in some instances it was easier to get forgiveness than permission! Slowly Christians started to see they had more in common than what kept them apart.

For Catholics, the Second Vatican Council (1962‒65) was a game-changer, encouraging engagement with the world, with other Christians and with other religions. The ‘ecumenical age’ was well and truly born, and the name-calling, prejudice and intolerance that had marked the years of my own faith-development, in relationship to other denominations, seemed to slip away.

The first layman invited as an observer to the Second Vatican Council was French philosopher and theologian, Jean Guitton (1901‒99). Writing at the end of the Council, he hinted at the difficulty that lay ahead for the ecumenical movement, tempering the excitement and hope of the goodwill being expressed, by noting, “Once the tie of love has been untied, the last steps are the steps that are never taken.” (Great Heresies and Church Councils – p.182)

Earlier, in the same book, he echoed what I have found so often in my reading about Luther: “…neither Erasmus, Luther, nor Calvin had any notion of the transformation they would bring about. They said repeatedly they had no intention to dissociate the Church from Christ – only to reform her, to guide her back to her sources, so to speak, and make her young again.” (ibid. p.146).

This is the third part in a series of five presented by Fr James B Lyons. This paper was first delivered in May this year for the Lutheran Church in Wellington as part of their commemoration of Luther’s 500 year anniversary. The commemoration goes through to October. Part four of the serialisation will be in next month’s WelCom.