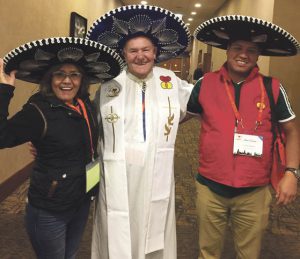 Fr Ron Bennett with Maria and Carlos Fernando from Mexico at the 50th Anniversary of Marriage Encounter in Chicago.

Recently I attended the 50th Anniversary of Marriage Encounter in Chicago, USA, along with Fr Paul Kerridge, Waipukurau; Neil and Francie Ivamy, Dannevirke; David and Bronwyn Lea, Pahiatua; Kathleen and Michael Williams, Upper Hutt; Fr Mike McVerry, Fiji; and Fr Emil Frische mhm, Kaikohe. It was an inspiring time to be with over 500 couples and perhaps a hundred priests, and five bishops, from all over the world.

Marriage Encounter is unique in that it seeks to renew the sacraments of marriage and priesthood in our Catholic Church. It is for couples, who love each other deeply, and want to spend quality time together, to celebrate their love, away from the distractions that often happen. Everyone deserves such a weekend. It is good for priests too, as they see their people’s love for them, and reignite their love for their people.

Marriage Encounter began as a Catholic movement in Spain in the 1950s when a priest, Fr Gabriel Calvo, began developing a series of conferences aimed at strengthening marriages. By the late 1960s, the marriage enrichment weekends were also being offered to couples in the United States, and continue to be offered today in various languages and in nearly 100 countries throughout the world.

The weekends typically consist of retreats, which begin on the Friday evening and end on the Sunday afternoon. Although there may be up to 10 or 15 couples on such a weekend, it is also a very private weekend. There is no group work – three couples and a priest facilitate the retreat. Couples listen to a sharing from a couple and the priest, and then share in private what they have heard.

The next Marriage Encounter weekend in Wellington is 9–11 November at the Home of Compassion, Island Bay. Please book early. For more details phone 0800 362 686 or go online to www.marriageencounter.org.nz or Google search: Marriage Encounter New Zealand.