Br Kieran Fenn begins a three-part series begun a series on Mary in Culture as a contemporary form of Scriptural analysis, which applied to Mary, produces some very important results.

I recently had a letter asking me about the relationship of Jesus and Mary within the socio-historical setting of their own world, first century Judaism. It made me think of the reality of Mary’s cultural world and the powerful question of Edward Schillebeeckx, ‘What have we done to Miryam of Nazareth?’ One of the newer approaches to the Scriptures is that of Social Science and scholars such as John Pilch and Bruce Malina. They too have reflected on Mary through Mediterranean eyes so as to account for the status and roles ascribed to her. Regardless of our ignorance of the actual figure of Mary of Nazareth, the fact that Jesus had a mother would have sufficed to account for the Mediterranean-generated attitude toward that relatively unknown personage.

Nearly everything claimed for Mary over the past two thousand years is simply not found in the New Testament. Nothing is found about her parents, Mary’s birth, childhood, marriage, life in the holy family, her role. We have to go to the apocryphal account in the Protoevangelium of James (145 CE) for that, a gospel not accepted by the early church, and an imaginative development of the infancy narratives of Matthew and Luke. What is abundantly clear is that while the New Testament has little to say about Mary, what it does mention serves to explain who Jesus might be. 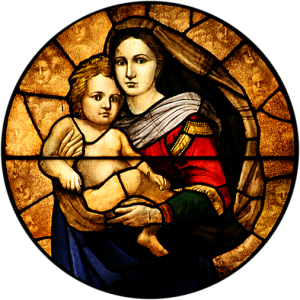 What is obvious through history is that devotion to and understanding of Mary are rooted in and derived from the Mediterranean cultural region. What is typical of this region is kinship as the focal social institution and concern for honour and shame within a gender-based division of labour. This is so alien to the values of individualistic and gender-equality societies. As most of our thinking about Mary arises out of the infancy accounts let’s begin there. Note that their focus is on Jesus, not on Mary. Let’s not forget the key interpretative feature that all of these texts are affected by the fact Jesus was crucified and raised from the dead and all the gospels are written in light of that event.

In antiquity, the description and assessment of the birth and childhood of notable personages inevitably derive from the adult status and roles held by that person. If Jesus of Nazareth is the Messiah to come, raised from the dead by the God of Israel, then obviously his birth and childhood would be just as the Synoptic Gospels described it. Certain characteristics were read back to the very moment of the birth of great persons. What is said about Jesus’ mother underscores the qualities of Jesus as person, and are a ‘reflection’ of Jesus as Risen Messiah.

How this works can be seen from the later text in Acts where, after the Resurrection and in light of the Spirit, ‘young men shall see visions and old men dream dreams’ (Acts 217), we see in Matthew’s infancy God communicating with old men (magi) or Luke’s aged Zechariah. The pouring out of the Spirit on a young woman (Acts 1:17 continues to include sons and daughters) who has a procreation-related vision (the Annunciation), is a typical feature of biblical literature’s birth announcements. God does communicate with women about their reproductive functions and subsequent gender-based roles, so often beautifully caught in words such as, ‘And God remembered Sarah… Rebekah…Rachel…Ruth… Hannah….’. The author of life remembers the daughters of God and they conceive.

Thanks to her vision Mary considers her son as special since she can take a trip alone from Nazareth to a city of Judah (Luke 1:39). God knows prophets before they are born, consecrating and calling them from their mother’s wombs (Jer 1:5 and Isa 49:1). Paul believed the same (Gal 1:15-16). As might be expected, having been filled with the Holy Spirit, Elizabeth proclaims Mary blessed because of her reproductive role: ‘Blessed is the fruit of your womb.’

Since all children were swaddled, so Jesus was too; for Luke this was a sign for the shepherds (Lk 2:12). The practice of swaddling underlines the authoritarian quality of Mediterranean society, a restrictive practice that went on until the 17th century. Wrapping with bands of cloth was to ensure that limbs grew straight and it went on for the first eight to nine months’ of life. They also represented limitations placed on the immature or inexperienced.

In the Gospels we find Jesus properly talking down to his mother (Luke 2:49 and John 2:1-4), and even distancing himself from her and her Mediterranean claims on him: ‘Here are my mother and my brothers!’ (Mk 3:31-35); ‘Blessed rather are those who hear the word of God and keep it’ (Luke 11:28). Also we have no record of Mary at the foot of the cross in the three Synoptic Gospels, not even in Luke, her great champion. While we turn to John for that, we find in John nothing of Jesus’ birthplace nor the name of Jesus’ mother. Without the Synoptic Gospels’ tradition, chances are Mary of Nazareth would not be known or remembered at all, but ‘the mother of Jesus’ would have substituted for her.

In short, regardless of the extent of our ignorance of the actual figure of Mary of Nazareth, the fact that Jesus had a mother would alone have sufficed to account for the Mediterranean-generated attitude toward that relatively unknown personage. Today there is abundant evidence that it did suffice.