In his exploration of ‘Mary in Culture’ as a contemporary form of scriptural analysis, Kieran Fenn FMS presents part four of his series.

Of course other sociological and anthropological factors were involved. One was the level of secular and religious education among the laity, which has increased dramatically. The need for laity education was addressed by St John Paul II as one of the Church’s greatest needs. Devotions of significance to European immigrants to many countries would gradually lose their significance for successive generations of their children. The challenge is to contribute to the development of ‘authentic’ Marian devotion as urged by the two documents mentioned, to incarnate the church and a devotion ‘of permanent importance’ in a world that is distinctively new.

To incarnate European-inspired devotion to Mary, the Mediterranean maiden, in distinctively new countries, is a cross-cultural task of mammoth proportions, for it involves the challenge to understand two – and in our own country more than two – contrasting cultures: that of the Mediterranean world and that of our own shores. Marian devotion will have to be both faithful to its Mediterranean roots and relevant to its new cultural context. 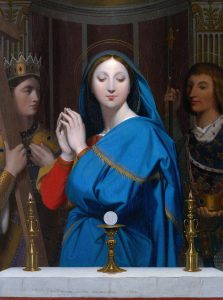 Being: describes an orientation towards human activity marked by spontaneity in response to life experiences. This is the exact opposite to the take-charge outlook. It is manifest in Mary’s response to the message of the angel: ‘Behold I am the handmaid of the Lord; let it be done to me according to your word.’ Mary yields willingly to accept life as is very normal
for Mediterraneans.

At Cana, where Mary invites Jesus to intervene in a moment of need then gives instructions to the servants and apparently ‘takes charge’ of the situation, her behaviour rather indicates she and Jesus are somehow related to this couple and family. It would be shameful for a non-relative to interfere in the affairs of a non-related family. Even here, Mary responds spontaneously as a female relative is expected to respond – with a concern for the honour of the family lest it be shamed by a sudden shortage of wine at a celebration.

‘Behold I am the handmaid of the Lord; let it be done to me according to your word.’ [Luke 1:38]. Mary yields willingly to accept life as is normal for Mediterranean people.

Group focus: rather than focus on individuals, individuals are always to subordinate personal wishes and desires to the group. While listening to Jesus teach, the crowd notes the approach of visitors and advises Jesus: ‘Your mother and brothers wish to see you.’ They fully expect Jesus to halt his personal teaching agenda and to defer to his family, his ‘main’ group, even above the needs of the crowd, also an important group for Jesus. His mother and brothers expect that too. Imagine the shock of Jesus’ reply. He appears to have gone right on teaching and ignoring his family’s request.

Two cultural aspects should be noted. The behaviour of all Mediterranean family members is expected to contribute rather than detract from family honour. On the other hand, the rude outburst of an adolescent son towards his mother (see, The Child Lost in the Temple) that demonstrates his growing manliness, are supposed to disappear in adulthood and be replaced by a less-strained relationship. Notice that Mary comes with a group just as she stands at the foot of the cross with another group (the women and the Beloved Disciple). Just before he dies, Jesus makes sure Mary will not be left alone but will have some adult male to look after her as the culture requires.

While the annunciation is a personal experience for Mary and is presumed to have taken place in a home, recall the home is the domain of all the women. Woman and children of the extended family are all in and around the home. It is rare and open to suspicion of shameful behaviour in the Middle East if a woman ever appears anywhere alone rather than in the company of other women and children of the extended family.