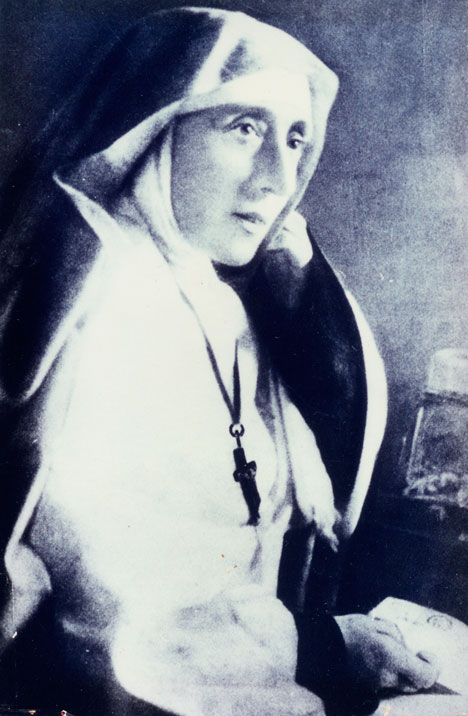 The Little Company of Mary celebrates the 100th anniversary this year of the death of its founder the Venerable Mary Potter.

Mary was born in London on 22 November 1847, the youngest of five and the only daughter of William and Mary Anne Potter. Her father abandoned the family when Mary was a baby. A congenital heart condition left Mary frail all her life.

In her teens Mary was briefly engaged then became a novice with the Sisters of Mercy but after 18 months returned home, broken physically and in spiritual turmoil.
Convinced that God was calling her to do something for the dying, Mary spent long hours in prayer and  the constant pain honed her spirituality.

In January 1877, Mary visited Bishop Edward Gilpin Bagshawe of Nottingham who realised her potential as an assistant for his diocese. Mary made her home in an abandoned stocking factory and young women joined her, impressed by her holiness and sense of purpose.

On 2 July 1877, Mary Potter formed the Little Company of Mary, the name reflecting the congregation’s call to stand with Christ’s mother on the Calvarys of people’s suffering, in prayer, solidarity and, where possible, healing presence.

When the congregation was just a few weeks old, Bishop Bagshawe declared himself to be the ‘Higher Superior’ and deposed Mother Mary who was sent out to beg. She contracted both typhoid fever and tuberculosis. Two years later Bishop Bagshawe realised his mistake and reinstated Mary.

Mary’s vision for the congregation was of a worldwide group of women praying for and working with the sick, suffering and dying. Pope Leo XIII welcomed her to Rome and eventually approved the order’s constitution.

The Little Company of Mary spread rapidly, with Sisters coming to Australia as early as 1885. As a young woman in England, Mary had met a young Marist priest, Fr John Joseph Grimes, from Christchurch. More than 30 years later, the now Bishop Grimes wanted to establish a Catholic hospital in his Christchurch diocese.

While visiting Rome in 1912, Bishop Grimes begged Mother Mary to send sisters to Christchurch to found a hospital. She agreed and some sisters crossed the Tasman.

This was the last foundation to which Mary gave her blessing and the Aotearoa New Zealand community rejoices in this direct link to their revered founder.

Mary died in 1913 aged 65. This year, the sisters of the Little Company of Mary rejoice that through her inner strength and holiness, the Church and the world have been enriched by her legacy for those suffering and dying.

For his centenary Mass in honour of Mary Potter, Archbishop John Dew has chosen John 3: 7-15 where Jesus speaks to Nicodemus of being born from above of the Spirit.

The passage speaks to me of being born into Christ from the moment of our baptism and continuing daily to renew our commitment to live in and for Jesus. Jesus says: ‘The wind blows where it will’ and we don’t know how that happens or where it takes us.

And that is the divine story of Mary Potter.