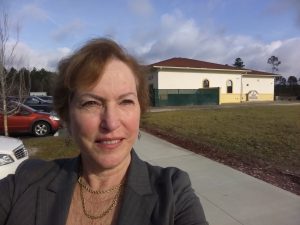 The nice thing about being a Catholic is that the mass is the same no matter where you are in the world. I’ve attended mass in 100 countries and can vouch for the sense of familiarity and comfort when walking into a Catholic church.

Imagine walking into mass in a small American church in Yulee, Florida [last December] to be greeted by an announcement from the pulpit that shook us with a sense of horror and foreboding.

Our extended family group settled into the front pews, just in time to hear the announcement from the pulpit that all doors to the church were being locked, and windows too. No one was allowed into the church without being vetted by the ushers at the door. Anyone needing to leave in an emergency had to find an usher.

And we were warned never to open the church door from inside to let anyone in.

The bishop said the policy stemmed from the Texas church mass shooting [November 5 2017] that killed two dozen worshipers inside a Baptist church. The announcement sent chills up our spine; and instead of listening to the priest, we mentally prepared our escape if a mass shooter burst into the door.

The odd thing about this diocese-wide mass policy was the Texas shooting was 1700 km away, and over recent times there have been plenty of other church shootings, including two killed at a California Catholic church parking lot that same week. According to the Faith Based Security Network, there were 67 deaths on church properties the first eight months of last year, even before the Texas shooting.

And Florida has long been familiar with gun violence and mass shootings. It had 30 mass shootings in the past 18 months [to December 2017] and was the venue of the big mass shooting at the Pulse gay night club in 2016. It also holds the record for the state with the most incidents of road-rage leading to gun violence.

Like many others, Florida is a right-to-pack state, where people can carry a concealed weapon. Many people told me they have a concealed weapon – and give vague reasons such as a fear someone at some time might confront them. Most of these people can’t recall a specific incident where they needed to kill someone.

But they say they feel ‘more comfortable’ having a handgun in their pocket or handbag. One 70-year-old Catholic told me he just wants to make sure that if there ever was an incident the ‘other guy is the victim, not me the victim’.

A very young emergency doctor told me he would never move to New Zealand because of the lack of guns. When I pointed to his four-year-old and suggested it might be a safer place for children, the young father repeated that he wouldn’t feel comfortable without his handgun.

The Florida diocese is not the only one guarding its parishioners against mass shootings. Plenty of others are locking in their members. A nearby Baptist church sports a big sign, warning outsiders that their worshippers are armed.

Police in one community warned churches against putting up signs saying guns weren’t allowed – as it would simply encourage shooters to attack the defenceless congregation.

They call worshippers a ‘soft target’ because they are confined in a small space, in regularly designated times, and usually unprepared for flight.

With my sociology hat on, I found it curious that, with the plethora of gun violence over recent years, why churches are only now running scared and ramping up their security.

The answer could be that the shooter in Texas was not an immigrant, not dark-skinned, not politically active; in fact, not anything that people can say ‘I told you so’. The shooter was part of the community, looked just like them, and whose family were members of the church.

He was a good ole boy who turned sad.

And this may have been the proverbial straw that broke the camel’s back. For several years church security consultant companies have spanned across the country urging parishes to protect their worshipers. I found one Catholic church with a hidden buzzer to immediately call police if there is an intruder; several other dioceses have a standing security committee, protestant churches urging their Sunday worshippers to come ‘packing’.

The message for Kiwis is that there is less chance of being a ‘soft target’ for a mass shooter when we attend mass here, and we have so many things to be thankful for. Remember to pray for our Catholic community in other countries where they know they are taking a risk just going to mass.

Dr Catherine Strong from Wellington travelled around the United States during 2017 as part of her sabbatical leave from Massey University.