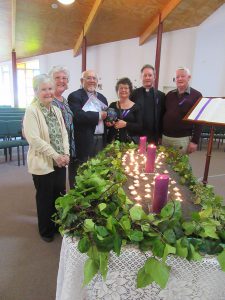 Standing beside lighted candles, one for each person who died to suicide, from left are: Helen Codlin who lost her daughter-in-law Carol; Kathleen Orsborn who lost her son Garrod; Terry Fleming who lost his daughter; Dale Greenbury who lost her brother Marty; Fr Marcus Francis; and Chair of the Liturgy Committee, Kevin Foley. Photo: Supplied

WelCom November 2017: On Saturday morning 14 October, to coincide with national Mental Health Awareness Week last month, 100 people from the Catholic Parish of Whanganui – Te Parihi Katorika a Ki Whanganui – gathered around the altar in St Anne’s Catholic Church for a Memorial Mass. Celebrated by parish priest Fr Marcus Francis and assisted by Fr Dondon Rancho and Fr John Roberts, the Mass was for those affected by suicide.

Opened to the wider city community, it was an occasion to pray for those who had taken their own lives, and for healing and mercy for family and friends left behind.

Fr Marcus said, ‘Mass is the most effective way of opening us all up to God’s mercy and healing. Nothing – absolutely nothing – can come between us and love of Christ.’

There were three poignant moments during Mass. After the homily, people were invited to light a candle for their loved-one and to place it on a decorated table in front of the sanctuary steps. Pausing during the Commemoration of the Dead in the Eucharistic Prayer, the 48 names of those who had died to suicide, written down in the All Souls Day Remembrance book, were read aloud. And those not receiving Communion were given a special blessing.

Morning tea that followed allowed time to talk in a safe environment.

NauMai September 2021 Catholics from around New Zealand have responded generously $15,000 for our flood-relief fund and the Tindall Foundation is set to make a further donation to help our…

Due to Covid-19 Alert Level 3, distribution of printed copies of WelCom to parishes and schools will be delayed until Alert Level 2. The September 2021 edition of WelCom | Nau…

Cathedral showcased in light and sound

NauMai September 2021 The beauty and tranquillity of the Cathedral of the Holy Spirit was explored with a unique ‘light and sound’ installation, on Saturday 14 August, to begin celebrations…