Last month in an article in WelCom on the liturgical calendar I pointed out this year is Year A of the Liturgical Cycle and that we are following the Gospel of Matthew on Sundays during Ordinary Time. I suggested two short videos on YouTube provide an excellent way of getting to know the gospel. (You can access them at: tinyurl.com/YouTube-Matt-1-13 and tinyurl.com/You-Tube-Matt-14-28). 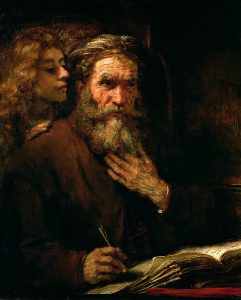 St Matthew and the angel. Rembrandt’s painting (1661) of the angel dictating the gospel to the evangelist Matthew. Louvre, Paris collection.

In a series of articles over the next few months I will address some basic ‘who, what, where, when, why and how’ questions about Matthew’s gospel. I will try to show throughout how it is relevant for our lives today.

Of course, much of Matthew’s language is already very familiar to us: ‘go the extra mile; here today gone tomorrow; don’t cast your pearls before swine; keep on the straight and narrow; salt of the earth; like a wolf in sheep’s clothing; a house built on sand; shout it from the rooftops; the blind leading the blind; turn the other cheek; a millstone round your neck; the eleventh hour; the chosen few’.

Who was this man whose gospel contains some of our favourite passages but also some of the most challenging teachings of Jesus? For example, ‘Come to me, all you that are weary and are carrying heavy burdens, and I will give you rest…For my yoke is easy and my burden is light’ (Matt 11:28-30).

One such teaching we became very familiar with during the Year of Mercy is highlighted in the Last Judgment parable (Matt 25: 31-46). It is there we find the Works of Mercy ‒ feeding the hungry, giving drink to the thirsty, etc. We learn it’s not how often we read or hear the gospel that ultimately counts; rather it’s what we do to put its message into practice. In his recent maiden speech in Parliament, Mt Roskill MP Michael Wood argued it this way:

‘My Christian faith ‒ I am an active Anglican ‒ imbues me with a profound belief that every life has an essential dignity, that we flourish when we are connected to one another in community, and that the world we live in is a gift to be cared for, not exploited for the benefit of a few. Those are the values that I will always go back to in this House. But, as St Francis of Assisi once said: “Preach the gospel to all the world. Use words, if necessary.” Values alone, whether held in your heart, expressed in flowing prose, or brilliantly tweeted, are not enough in and of themselves; it is the doing that changes things for the better.’

So it’s all about the doing. As whiteware retailer LV Martin used to say, ‘If it’s not right, we’ll put it right and it’s the putting right that counts.’ That’s the bottom line for Matthew.

Who was Matthew and who did he write the Gospel for?

Traditionally the author of this Gospel has been identified as Matthew, the tax collector (Matt 10:3) called by Jesus and sent out as an apostle. However, although this Matthew may have been responsible for an earlier version, most scholars agree he is not the author of the Gospel. Why do they say this? Basically for three reasons:

1) the writer copied extensively from Mark’s Gospel ‒ with no acknowledgement I might add. If he were an eyewitness surely he wouldn’t have needed to copy!

2) A tax collector probably wouldn’t have had sufficient religious and literary education to write the Gospel. (I can hear some of you saying but that’s irrelevant because an angel dictated it all to Matthew and we have Rembrandt’s painting to prove it. That raises the whole issue of what we mean by ‘inspiration’, which is incredibly important and cannot be addressed in this article).

3) The concerns the Gospel addresses do not come from the time of Jesus but rather are questions that second- generation Christians were asking. For example, what shall we do about Gentiles who want to become Christian? Unfortunately for us, like many ancient authors the writer doesn’t identify himself. Biblical scholars claim with much supporting evidence I can’t go into here, that Matthew (and I’ll continue to call him Matthew) was probably a Jewish Christian, probably writing about 85 AD (after the time of Jesus who died about 33 AD) for a mainly Jewish Christian audience who probably lived in Antioch in Syria. Antioch was the third largest city in Syria and quite a few Jews live there.

Broadly speaking Matthew wrote his gospel for a community desperately needing a sense of identity with the past and direction for facing an uncertain future ‒ sounds like us doesn’t it? The upcoming Synod for the Archdiocese of Wellington is very timely. Matthew’s Church was transitioning from one that was firmly rooted in Judaism to one that was also reaching out to a wider Gentile world. Perhaps today we would see that world as the ‘peripheries’ Pope Francis continually challenges us to reach out to. What specifically are the ‘peripheries’ you?