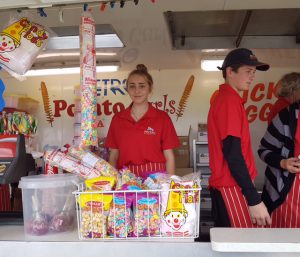 Young people from the Catholic Parish of Napier helped out at Mahons Amusement food wagons at Hawkes Bay’s weekend show in October. Over the years, we have built up a good relationship with Mahons who operate amusement rides and attractions at New Zealand shows. We donate our time and they donate considerably to our funds. A big thank you to Andrew Cowan for organising this and to William Sheardown, Isaac Powell, Roomi Kooba, Bridget Kelly-Lowe, Celine Lowe, Sarah O’Malley, Sharese and Denise Penitito for their awesome effort! In addition to Mahon’s huge donation to our youth group we got to have a few free rides and time to chillax after we finished! Great work experience for the young ones. Just goes to prove ‘In giving, you receive!’ 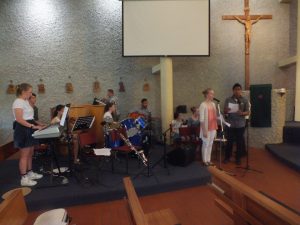 Our recently formed youth band debuted at two of our three churches over the past couple of months. In October they played at their first Mass at St Patrick’s Church in Napier central. So good was the feedback it led to a letter of thanks from the Parish Liturgy committee! In November they played at their second Mass at St Mary’s Church in Greenmeadows, Napier, again to really encouraging feedback. Praise God!

Most of the band members will be assisting with the music at St Mary’s Church Vigil Mass on Christmas Eve at 7pm.