An epic journey from Nelson to Westport marked the start of life for a new classroom for St Canice’s primary school on 1 February this year.

The classroom with another for Kaikoura, was built in Nelson. Once the classroom was finished, it was hoisted onto the back of a truck and sent on its way, made longer by a detour through Greymouth to avoid the Buller Gorge. Once on site contractors lifted the classroom by crane over the other school buildings and into position. 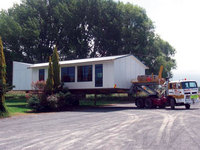 It fared better than the classroom for Kaikoura, however, which was delayed when the delivery truck broke down. It finally arrived after the first day of term and was soon installed and ready for action.

So after initial setbacks both St Joseph’s School, and St Canice’s School, received their classrooms early in the new year ready for a roll increase as new students arrive throughout the year.

With the number of children wishing to attend a Catholic school on the rise, Catholic Schools Board Limited approved the new classrooms for Kaikoura and Westport late in 2005.

But difficulties in getting timely contracts to build the classrooms in the two towns forced CSBL to rethink its strategy which led to an approach to a Nelson contractor who was already working at St Paul’s in Richmond.

The construction of the classrooms offsite in Nelson and the transporting the buildings to the schools proved to be a cost-effective and efficient method of providing classrooms.CSBL would like to thank all those involved in accomplishing this feat.