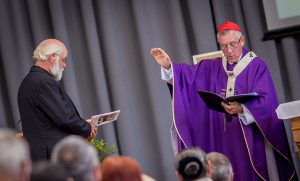 At the Parish of Wellington South inaugural Mass, Cardinal John Dew commissioned Joe Green as the new Lay Pastoral Leader who will minister with the parish leadership team. The team consists of Joe, Fr David Dowling and Fr Dennis Nacorda.

The Eucharistic celebration and commissioning ceremony were filled with energy and life. Calling Joe in front of the 800 parishioners, family, friends and his Launch Out colleagues, Cardinal John advised Joe he was being entrusted to minister in the new parish. Each of us is baptised into the priesthood of Christ and some of us have a particular ministry from this call – for Joe it is to be the Lay Pastoral Leader.

Cardinal John told the congregation that Joe has his full blessing and support as he ministers with the priests Frs David and Dennis. Joe affirmed he would accept the responsibilities and service, and the community offered their support and prayers for him.

Joe has completed four years study in the Archdiocesan formation programme, Launch Out, including 18 tertiary papers in scripture, theology, and pastoral leadership, pastoral projects under a mentor’s guidance, prayer days, retreats and monthly spiritual direction. During these years he has deepened his relationship with Christ and discerned his vocation to pastoral ministry and leadership.

After completing Launch Out, Joe walked the Santiago de Compostela Camino. He spent a month making this significant pilgrimage as a retreat, arriving at the Cathedral of St James in Spain. Back in Wellington, he resigned from his Police career of long-service and 10 days later answered an advertisement for the Lay Pastoral Leader in Wellington South, to which he has been appointed.

The new parish is expected to be renamed under the patronage of Suzanne Aubert. Quoting Aubert, Cardinal John said, ‘If people laugh at you, laugh with them and tell them they are quite right. This will contribute greatly to the harmony we ought to cultivate’. This spirit inspires the pastoral leadership team, the pastoral council, the large number of ministries, and the gifted people in this parish.

Joan McFetridge is the formator and manager of the Archdiocesan Launch Out programme.