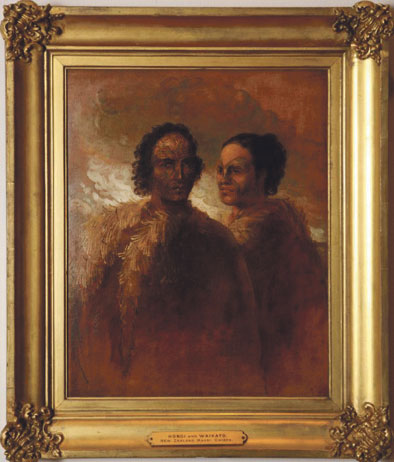 In February, Wel-Com carried the first of a two-part article about the independent report Ngāpuhi Speaks which documents northern Māori interaction with settlers and the British crown. Part two was to have been run in March but a complaint to the Press Council stalled publication. The complaint was not upheld and the council’s judgement was published in the June’s Wel-Com. Here now is the second part of the article about this comprehensive report from a Māori perspective.

This second article looks at the context of Te Tiriti o Waitangi’s signing on 6 February 1840 and subsequent events. In the first article we looked at Māori international interaction before 1840 and saw that Māori were trading extensively across the Tasman and with other parts of the Pacific, Britain and the United States. So Te Tiriti was part of a development that began well before 1835 and He Wakaputanga (the Declaration of Independence) and continued beyond 1840 because of the way rangatira (chiefs) viewed the relationship with the British Crown and with Pākehā settlers.

Māori were motivated to participate in Te Tiriti by the development of international relationships through trade, the need to deal with Pākehā misconduct and disregard for tikanga – the law of the country – and tension over land.

For Māori in the 1830s an expanding trade, particularly with the United States, was a major drive. The number of ships Māori had to service grew from about 25 a year in the 1820s to well over 100 by the late 1830s with a small number of Pākehā settlers offering specialised services. Many ships carried Māori-grown food across the Tasman, which gave rise to a particular relationship between Ngāpuhi leaders and the British Crown (p 160).

The report looks at accounts of the signing of the Treaty of Waitangi recorded by Pākehā scribes who had limited understanding of te ao Māori (the Māori world) – the language and particularly of the style of the whaikōrero (speeches) – and misunderstandings of such key words as ‘tuku’, which Māori historian Manuka Henare and Patu Hohepa said in evidence to the Waitangi Tribunal ‘… the connotation of “give” (tuku) is that of “allow” or “permit” rather than of “give away”.’

Rangatira had come to regard Britain’s Queen Victoria and her governors with great affection and mutuality going back to 1820 and Hongi Hika’s visit to King William IV (p204). So when missionary Henry Williams explained, according to his own account, the Māori version of the treaty on 5 February 1840, ‘it is significant,’ says the report, ‘that the first words of the treaty state the queen’s affection for the rangatira and hapū of New Zealand and her assurance that she will see to the upholding of their authority and the securing to them of their lands’ (p.205).

The report draws on a wide range of sources in discussing the meaning for Māori of words such as ‘kaiwakarite’ (peacemaker, mediator, organiser but not controller). Bishop Pompallier’s quoted words show how rangatira viewed the queen’s representative. ‘The chiefs did not want to hear talk of obedience; they supposed that Captain Hobson would be an additional great chief for the Europeans only, but not for them’ (p.207).

Another significant word in terms of different understanding of Te Tiriti and The Treaty is ‘rangatira’ which was used to describe the person the queen sent to act on her behalf. For Māori a rangatira ‘was a leader who had responsibility for and accountability to his or her own people (who) would negotiate with other rangatira in matters of common concern’ (p.208).

The meaning for Māori in 1840 of the term ‘kawana’ (governor) would have been influenced by the governors they met – those in Norfolk Island and New South Wales. Christian Māori would also have known of the term from the Bible.

‘Through their travels, Māori had seen the imperious and harsh rule of some governors. The rangatira who spoke at the treaty discussion were adamant that they would not allow this sort of governor’ (p.209).

The Northern Māori understanding of the term ‘wahi’, which appears in the second article of Te Tiriti, makes a difference to the meaning of what authority was being allowed to Hobson.

Manuka Henare clarified ‘wahi’ in evidence to the Waitangi Tribunal hearing as referring to a small portion of land.

‘Now Ngāpuhi rangatira said “Kei te pai (that’s all right). We promised that way back. If some of your people want to come here, we’ll give them a bit of land”. (It is equivalent to the way) wāhi tapu refers to that small portion of land that has been set aside for cemeteries or sacred stuff. … (such) ‘small pieces of land applied to the areas in which the governor would have authority’ (p.209).

Ngāpuhi Nui Tonu sought a relationship of mutual benefit between themselves and the queen and her people. They were entering into ‘a sacred covenant with the queen based in a history of affection, trust and mutual care between her tūpuna and theirs and renewing the covenant embodied in He Wakaputanga’. They needed to establish a framework of understanding outlining ‘respective responsibilities and duties to ensure good order into the future’ and they were accepting from the queen ‘her commitment to uphold their tino rangatiratanga and specifically their law, their authority and rights in the land, their authority and rights over their taonga, and their accustomed way of life’ (p.241).

Ngāpuhi Speaks makes it clear that Māori never intended to sign away their control of the land, which the early part of the report says has resulted in Māori being negatively and disproportionately overrepresented in health, justice and prison statistics.

As Erima Henare of Ngāpuhi Nui Tonu told the tribunal hearing, ‘Had ceding sovereignty been suggested at that time, that is, that the rangatira gathered at Waitangi should surrender their mana to all the foreigners, “all hell would have broken loose” and the foreigners would have been ejected or annihilated. Foreigners in the Bay of Islands in 1840 were mainly civilians and a few military personnel. They were hopelessly outnumbered. Every rangatira would have not merely been offended by unjustified suggestions for them to surrender their sovereignty, but would have been outraged and acted accordingly (p.153).’

Arena Heta, of Ngā hapu o Kāingapipiwai, said in evidence: ‘Te Tiriti allowed Pākehā to immigrate, to live among us and to trade. There is nothing in Te Tiriti that gave them the right to govern us or be our sovereign.’

In terms of an understanding of the Māori approach to building relationships with the outside world and Te Tiriti’s part in that, this report is invaluable. Every New Zealander should study it.

Ngāpuhi Speaks is available as an ebook and in hard copy.