Former pastoral workers in the Palmerston North Diocese, Jonny Boon and Mary-Grace Williams, are now in Thailand working with Burmese migrants and refugees in the town of Ranong, the capital of its province. 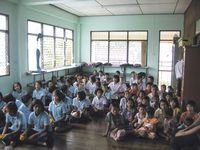 Ranong is the smallest of Thailand’s 62 provinces and its capital has around 25,000 Thais and up to 100,000 Burmese migrants. They have come in increasing numbers seeking work and a better life since Cyclone Nargis devastated much of Burma in 2008. 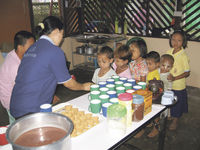 The ruling military dictatorship of Burma, the State Peace and Development Council has made life increasingly difficult for the ethnic tribes that live in Burma. Their ineffectual response to the effects of the cyclone as well as widely-documented human rights abuses, forced labour, recruitment of child soldiers and the torture of dissidents provides obvious reasons why so many Burmese regard life in Myanmar as untenable.

Few options are available to migrants in Thailand. They can work on the many fishing boats that work the port here but the risks are high and the wages far lower than those paid to Thai employees. We have heard of Burmese workers who have had a disagreement with the Thai captain and were simply thrown overboard while at sea. They can work 10-hour days in the fish processing factories for around 3,000 Thai Baht ($120NZ) a month. 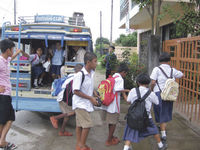 HIV and AIDS is a massive problem with a high incidence of sexually transmitted infections. Whole families, all HIV-positive, struggle to survive because of the cost of antiretroviral drugs. One such family that we have visited had lost their baby boy to AIDS a few weeks earlier but the father was recovering due to the Marist Mission Ranong (MMR) with which we are working helping to buy him antiretroviral drugs.

The Thai police try to keep track of the many unregistered and illegal migrants here. They often ask Burmese in the streets to see their papers. If none are produced a bribe can be demanded, often as much as a fortnight’s salary.
The Burmese are forbidden to own a motorbike or ute (the two main forms of transport around the pot-holed roads of Ranong) or even a mobile phone. Many Burmese migrants live in small shacks on stilts over the river. When police raid these areas, those without papers jump into the heavily polluted water to avoid paying the bribes.

Marists pastoring refugees
The MMR community that we have joined for this six months is a community of Marist priests, lay missionaries and volunteers who seek to meet the educational, pastoral and health needs of the Burmese here in Ranong.
MMR has introduced a number of initiatives since they arrived in 2007 after being unable to extend their visas in Myanmar. The Child Protection programme, sponsored by Save the Children Fund, UK, provides a safe place for Burmese children to learn and be cared for while parents are working. Many children in Ranong are at risk of being sexually exploited and abused.

The Marist Training Programme is a learning centre for Burmese children where they are taught Burmese, English and Thai as well as maths, science, computers, social studies and arts (schools are not allowed to officially exist for Burmese students in Thailand).

We have loved our first three months. The children are positive, happy and impeccably behaved. It seems that they realise how fortunate they are not to be working in a fish-processing factory like so many other young Burmese in Ranong.

Young people have a tough choice between helping to support their family and ‘being selfish’ by wanting to learn. Most families here support their children receiving an education in the hope of a more promising future.

Top right: The students of MTP (Marist Training Programme). There is about 50 students in the school and another 50 younger students in a programme called Child Protection. You can see both groups in the photos.


Left: Some of the Child Protection children lining up for their afternoon snack. These children are picked up each day from their homes to keep them safe while their parents work and to keep them off the streets.

Lower right: The students arriving at MTP in the morning. They are brought to school by Song Tiao. This translates literally to ‘Two Benches’. For more from this author, see NZers work with Burmese refugees in Thailand www.welcom.org.nz/?sid=1213