The founder of Challenge 2000 and a tireless worker for a better deal for countless young people over many years, Kitty McKinley, is ‘shocked and stunned’ that her work has been nationally recognised.

Kitty has been made a member of the New Zealand Order of Merit in the New Year’s honours for services to youth and the community. 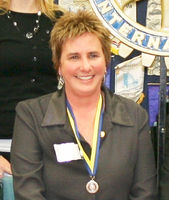 As a university graduate in 1977, Kitty joined Catholic Social Services and soon began working with young people and their families let down by the education system.

In 1988 she set up Challenge 2000 with the help of Johnsonville parish priest Eddie Condra who offered the presbytery kitchen as an office.
‘She employed a young man whom she paid a salary of $26,000 out of her own pocket.’

Condra says Challenge has flourished because of Kitty’s energy and innovation. ‘She thinks laterally – one door shuts and for Kitty, 10 others open.

He admires her ability to think quickly. ‘She’s assertive, she moves straight at issues. She’s political – she knows how systems work and she gets them to work for her. Also she’s very committed to the underdog.
‘The gospel digested, translated and applied is central to Kitty. And Challenge pays the price of opting for the poor.’

Condra says Kitty knows how to enter the world of the poor and marginalised rather than just helping them.
‘To do that you’ve got to change your values radically. You may hold onto your old values but you’ve now got to accommodate very different ways of looking at life – simple things like for people in lower socio-economic groups property has a different meaning. You’ve got to learn to live in that world and not blink.’

Challenge worker Steve Tamarapa is impressed with Kitty’s charismatic personality and ‘dogged determination’. As Kitty moves out of Challenge management, Steve does not believe people understand the level of commitment and sacrifice needed to lead the organisation.
‘I’ve always been amazed at how much she walks the walk.’

To Tamarapa she embodies Francis of Assisi’s “Preach at all times, where necessary use words”.
‘We’re all good at saying stuff but Kitty does it. She’s a daunting example.’

Links: A new youth house for Challenge
A change at the helm
Challenge College shuts