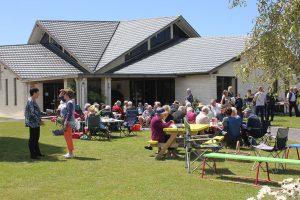 At 11am, Sunday October 28, Fr Seph Pijfers and Fr Andrew Kim, assisted by seminarian Jovane Leones concelebrated an anniversary Mass to mark one year on from the amalgamation of Our Lady of the Bays Catholic Parish. Held at St Peter Chanel Church in Motueka, this was the only Mass in the parish that day – a cunning ploy to ensure a good turnout! The church interior walls are designed as folding doors to expand the body of the church and accommodate a large number of people. It did just that on this occasion.

Before Mass began, a representative of each of the worshipping communities processed to the altar with a candle, to be placed around the main candle.

Music was supplied by a talented combination of musicians from Motueka and Richmond churches. Doug Hill composed Here We Stand for the original amalgamation Mass, which was again sung at the anniversary Mass. We were blessed to have Maria Archer sing Gounod’s Ave Maria at Communion.

Mass was followed by morning tea in the church foyer and a picnic in the church grounds, which lend themselves beautifully to such an event. Bread, BBQ sausages and meat patties were generously supplied by the parish – so generously there was a large surplus. The Richmond conference of the St Vincent de Paul Society was the beneficiary of the surplus, with a welcome addition to our food bank. All who stayed for the picnic-BBQ were in thoroughly relaxed form in the sunshine capital of Aotearoa, with a glorious day to complement our celebrations.