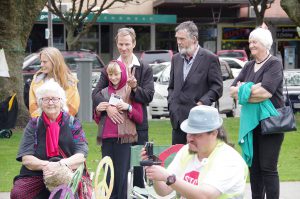 A multi-faith gathering with members of Baha’i, Catholic, Hindu, Jewish, Muslim and Quaker traditions began their protest week on 27 October. Rev Andy Hickman of All Saints Anglican Church said the forum was for weapons companies to make ‘business deals that fuel a global war machine, which causes death and destruction in countries across the world.’ Jordanian Hazim Arafeh said millions of the world’s refugees were Muslim, victims of war, fuelled by the arms industry.

On 31 October, about 200 people marched to show the weapons industry they were not welcome in Palmerston North – a designated Peace City since 1993. Activists from Wellington, Ōtaki and Auckland joined PAM. Ten protestors, who lay down in the street to prevent delegates going into the arena, were arrested. 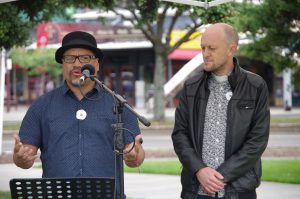 The peace events ended on 1 November with a book reading from Remember the Brave by Forrest and Lena Chambers about WWI conscientious objectors Archibald Baxter and Mark Briggs.

Newly ordained St Oscar Romero of El Salvador, assassinated while celebrating Mass, tells us that to be Catholic is to protest injustice and the institutional violence of the war machine.